Ukraine promises funds to keep flights passing through its airspace

KLM said it would stop services to Ukraine and Germany's Lufthansa also said it was considering stopping flights. As a result, Kyiv has allocated funds to guarantee the continuation of flights through its airspace. Kyiv has said it will keep its airspace open

Ukraine has allocated 16.6 billion hryvnia ($592 million, €520 million) to ensure the continuation of flights through the country's airspace despite fears in the West of a possible Russian invasion, Prime Minister Denys Shmygal said on Sunday.

Shmygal said the money had been reserved "to ensure flight safety in Ukraine for insurance and leasing companies."

"This decision will stabilize the situation on the market of passenger air transportation and will guarantee the return to Ukraine of our citizens who are currently abroad," he said. 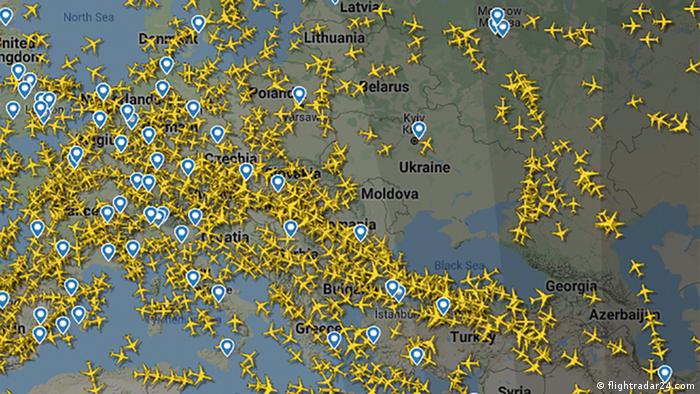 Many airlines are choosing to avoid flying over Ukraine

Mykhailo Podolyak, an adviser to the Ukrainian president's chief of staff, said there was no point closing Ukrainian airspace in response to Moscow's troop build-up.

"The most important point is that Ukraine itself sees no point in closing the sky," he told Reuters news agency. "And, in my opinion, that would somewhat resemble a kind of partial blockade."

Scheduling reconfigurations by individual carriers had "nothing to do with the decisions or policies of our state," he added.

During the conflict in 2014, 298 passengers on Malaysia Airlines flight MH17 died when their plane was shot down over eastern Ukraine as it flew from Amsterdam to Kuala Lumpur.

Meanwhile, President Volodymyr Zelenskyy called for calm after a number of Western countries urged their citizens to leave Ukraine.

Zelenskyy said he had yet to see convincing evidence over any possible Russian invasion, despite US intelligence suggesting such a military move from the Kremlin could be imminent.

US President Joe Biden spoke for about 50 minutes Sunday with Ukrainian President Volodymyr Zelenskyy and renewed promises of what the West says will be tough economic sanctions against Moscow and a NATO buildup in the event of "any further Russian aggression" against Ukraine, the White House said. They agreed to pursue both deterrence and diplomacy in the crisis, it added.