The Ukraine parliament has approved a law condemning "the totalitarian Communist and Nazi regimes," and outlawing all related symbols and propaganda. Many reminders of the past survive in the former Soviet republic. 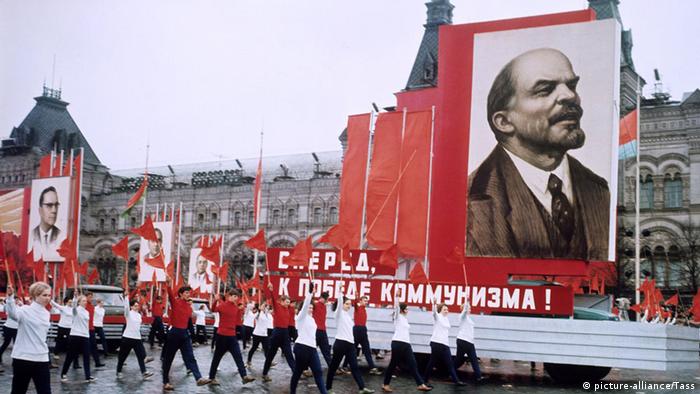 The legislation, which lawmakers adopted on Thursday, declares the former Communist regime to be criminal and condemns its policy of state terror, alongside Nazism.

The bill bans "all public denial" of the "criminal character" of both Nazi and Communist rule. In addition, the legislation outlaws "production," "circulation" or "public utilization" of their symbols, except for educational or scientific purposes - or when those symbols are located in a cemetery.

The document still needs to be signed into law by Ukrainian President Petro Poroshenko.

In practice, it means that Soviet flags, hymns, and monuments dedicated to famous Communist leaders are to be banned in the former Soviet republic. Also, companies would not be allowed to use the names of Communist leaders or refer to their activities, including the Bolshevik revolution in 1917, in branding.

Penalties for breaking the new law range from five to ten years in prison.

The move has stirred criticism in Moscow, with some Russian lawmakers claiming it was "cynical" to equate Communist and Nazi symbols. Moscow and Kyiv are currently locked in a power struggle, with pro-Russian separatists resisting the central rule.

Waiting for a makeover

It could lead to major changes for the country where many streets and squares still named after USSR heroes, or decorated with monuments symbolizing the regime which ruled the country until 1991. Even the giant Motherland statue in Kyiv holds a shield adorned with a hammer and sickle.

The legislation also forbids all symbols and propaganda relating to Nazism, as well as all activity of Nazi and fascist groups.

However, Ukrainian parliament adopted a separate law which officially recognized the role of a nationalist group fighting for the country's independence in the mid-20th century.

The faction, which leant towards German Nazis for a certain time during World War II, is often criticized as "fascist" in Russia, with some claiming that the group's ideology still hold too much influence in the modern Ukrainian government.