No let-up in Ukraine

A Ukrainian military intelligence chief was killed instantly when his car exploded at a Kyiv intersection. It's reminiscent of two recent broad-daylight killings of a journalist and a Russian opposition politician.

The blast coincided with a Ukrainian central bank warning that some Ukrainian banks had been hit by a cyber attack.

Photos issued by Kyiv police showed Shapoval's mangled car in the middle of the street.

Police said the explosion occurred early morning while the car was moving. A passerby was hospitalized with injuries.

Sheremet had quit Russian broadcasting in 2014 in protest at the Kremlin's stance on Ukraine's pro-Europe course and annexation of Crimea. 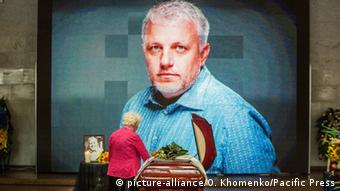 Voronenkov had recently relocated to Ukraine after being critical the Kremlin's seizure of Crimea while denying Russian fraud charges over real estate dealings.

Sheremet had been a friend of Boris Nemtsov, the Russian opposition leader and former Russian deputy prime minister who was shot dead in February 2015 on a bridge near the Kremlin.

The Moscow trial of Nemtsov's alleged killers, including a soldier from Chechnya, was delayed further on Tuesday when the judge removed two jurors.