Ukraine: Heavy fighting in Lysychansk as separatists claim gains — as it happened

Ukraine's army has denied claims by Moscow-backed separatists to have encircled the city. The capture of Lysychansk would allow the Russians to push deeper into the eastern Donbas. DW has the latest. 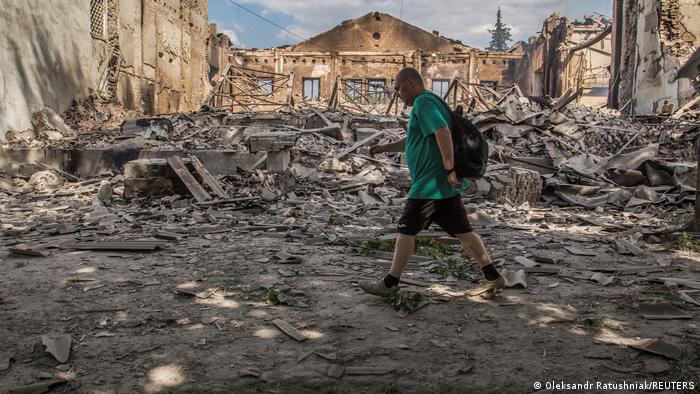 This live updates article is now closed. For our latest, on July 3, click here.

Belarusian President Alexander Lukashenko has claimed that Ukraine tried to strike its military facilities three days ago. But he failed to provide any evidence.

"Thank God, our Pantsir anti-air systems intercepted all the missiles fired by the Ukrainian forces," Lukashenko was quoted as saying.

The Belarusian strongman said his country does not want war with Ukraine.

However, the longtime Kremlin ally has supported Russia's military operation in Ukraine, allowing Russian troops to cross into Ukraine from Belarus as they tried and failed to take Kyiv.

London complains after two more Britons charged with being mercenaries

The UK government has accused Russian-backed forces of the exploitation of prisoners of war after two British men held by pro-Russian separatist forces in eastern Ukraine were charged with "mercenary activities."

The men were identified by British media as 22-year-old aid worker Dylan Healy and 35-year-old Andrew Hill, who is reported to be a volunteer fighter for the Ukrainian army.

The pair were captured in April and are being held by authorities in the self-proclaimed Donetsk People's Republic (DPR), according to Russia's TASS news agency. They were charged on Friday.

Healy's employer Presidium Network said the charges were a "fabrication" and "politically motivated."

A statement from the UK Foreign Office said: "We condemn the exploitation of prisoners of war and civilians for political purposes and have raised this with Russia."

"We are in constant contact with the government of Ukraine on their cases and are fully supportive of Ukraine in its efforts to get them released."

Last month, two other British military volunteers and a Moroccan were sentenced to death by a court in Donetsk. They were also charged with being mercenaries. At least two of the men have appealed.

Westerners have been traveling to Ukraine, either to help defend it against the Russian invasion or to help provide humanitarian aid to the millions of Ukrainians whose lives have been upended.

Russia-backed separatists say they have "completely" encircled the key city of Lysychansk in the eastern Luhansk region.

"Today the Luhansk popular militia and Russian forces occupied the last strategic heights, which allows us to confirm that Lysychansk is completely encircled," Andrei Marotchko, a spokesman for the separatist forces, told the TASS news agency.

Ukraine's army denied the claims, saying that fighting is still raging in the city.

"Fighting rages around Lysychansk. (But) luckily the city has not been encircled and is under control of the Ukrainian army," Ruslan Muzytchuk, a spokesman for the Ukrainian National Guard, said on Ukrainian television.

The regional governor also said Russians have been shelling the city from different directions.

The UK's Defense Ministry said in its latest intelligence update on Saturday that Russian forces "continue to achieve minor advances" around the city.

The capture of Lysychansky would allow the Russians to push deeper into the eastern Donbas, which has become the focus of their offensive since failing to capture Kyiv earlier in the invasion.

Five Ukrainian army command posts in the eastern Donbas and the southern Mykolaiv region have been destroyed by Russian troops using high-precision weapons, the Russian Defense Ministry was quoted as saying.

Russian forces also struck three storage sites in the Zaporizhzhia region to the northeast of Mykolaiv, the ministry said in remarks carried by Russian news agencies. It also said the Russian air force had struck a Ukrainian weapons and equipment base at a tractor factory in Kharkiv in northeast Ukraine.

The reports cannot be independently verified.

Slovyansk Mayor Vadym Lyakh said on Telegram on Saturday that four people were killed in a Russian cluster munitions attack on Friday night.

The city is still under Ukrainian control and is a major stronghold in the region of Donetsk.

Lyakh said that the neighborhoods that were hit had no military targets.

Cluster munitions are bombs that release several smaller explosives and they are banned under an international convention.

The UK's Ministry of Defense said in its intelligence update on Saturday that Russian forces "continue to achieve minor advances around Lysychansk" — one of the main Russian targets in the east of Ukraine after their forces took Sievierodonetsk.

The update also claimed that Russian forces have likely been using less precise missiles due to "dwindling stockpiles of more accurate modern weapons."

It said that the strike that hit the Kremenchuk shopping center appeared to have been an air-launched anti-ship missile being used in "a secondary land-attack role."

The lack of precision for such missiles "greatly increases the likelihood of collateral damage when targeting built-up areas," the UK ministry said.

A German official has warned that Russia could be planning to use a regular maintenance break on the Nord Stream 1 gas pipeline as an opportunity to cut the gas supply to Germany completely.

Klaus Müller, the head of the Federal Network Agency (Bundesnetzwerkagentur), said that made it crucial to save as much gas as possible.

He told Saturday newspapers from the Funke Media Group that the question was whether the planned 11-day maintenance period, due to start July 11, will "become a longer [period] of political maintenance."

He said that if the gas supply from Russia "was reduced longer for political reasons, we have to talk more seriously about ways to cut consumption."

Russia has already cut or reduced its gas supply to several European countries amid tensions over Moscow's invasion of Ukraine.

Powerful explosions rocked the southern Ukrainian city of Mykolaiv early Saturday, the mayor said, a day after at least 21 people were killed when Russian missiles hit the neighboring Odesa region.

"There are powerful explosions in the city! Stay in shelters!" Mykolaiv Mayor Oleksandr Senkevych wrote on the Telegram messaging app.

It was not immediately known what caused the explosions.

The US Defense Department does not believe there is any credence to Russia saying its retreat from Snake Island was a gesture of goodwill, said a senior American official on Friday.

"We view this development as that the Ukrainians were very successful at applying significant pressure on the Russians, including by using Harpoon missiles that they recently acquired to attack a resupply ship," the official said.

According to him, the Ukrainians made it very hard for the Russians to sustain their operations there and made them very vulnerable to Ukrainian strikes. "So, that of course, is why Russia left the island," the official said.

The official, who was not named but whose comments were published on the DOD website, said that reclaiming Snake Island would make it easier for Ukraine to defend Odesa and to open shipping lanes in the future with Russia no longer controlling the island in the Black Sea.

"Three missiles hit an ordinary residential building, a nine-story building in which no one hid any weapons, military equipment or ammunition, as Russian propagandists and officials always tell about such strikes," Zelenskyy said.

The Ukrainian president called the attack "a deliberate, purposeful Russian terror, not some mistakes or an accidental missile strike."

Zelenskyy also said that he was grateful to the United States of America and personally to US President Joe Biden for the new support package for Ukraine announced today, which includes NASAMS surface-to-air missile systems.

"An anti-aircraft missile complex that will significantly strengthen our air defense. We have worked hard for this supply. In total, this package is worth 820 million dollars and, in addition to NASAMS, also includes artillery munition and radars," Zelenskyy said.

Recap of key events on Friday

Ukraine's army accused Russia of carrying out strikes using incendiary phosphorus munitions on Snake Island Friday, just a day after withdrawing its forces from the rocky outcrop in the Black Sea.

Ukraine has called on Turkey to detain a Russian-flagged ship carrying several thousand tons of grain which Kyiv claims Russia has stolen.

The Ukrainian soup borscht — which in 2023 was set to be added to the UN's list of endangered cultural heritage items — has had its inscription hastened by the "negative impact on this tradition" caused by the war, UNESCO said.

European Commission President Ursula von der Leyen said on Friday that "massive investments" would be needed for the reconstruction of Ukraine, but the country's path to EU membership would go "hand in hand" with that process.