A surprise deal between Ukraine and Russia implies new rapprochement in Eastern Europe. Top-ranking politicians have declared a new era in the countries' relations - to the chagrin of Ukraine's pro-West opposition. 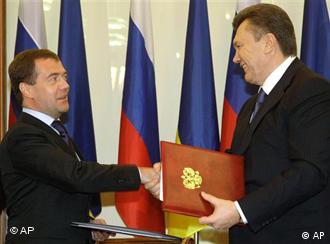 The deal will save Ukraine 30 billion euros over a decade

Ukraine and Russia on Thursday signed a landmark agreement to extend the lease of a Russian naval base in Crimea by 25 years.

The deal, which Ukrainian President Viktor Yanukovych and Russian President Dmitry Medvedev signed in the eastern Ukrainian city of Kharkiv, will allow the Russian Black Sea fleet to stay in Ukraine until 2042, in exchange for Kiev receiving a 30 percent discount on Russian gas imports. According to Yanukovych, this discount will save Ukraine 30 billion euros ($40 billion) over the next ten years.

Russian Prime Minister Vladimir Putin hailed the surprise agreement as a "breakthrough in bilateral relations," adding, "the main thing here is not the money, not gas and not even the fleet. The main thing is relations between the two peoples, relations of trust towards each other, the realization of common interests and historic purposes, a feeling of fellowship."

In Kiev, President Yanukovych asserted that Ukraine will not give full control of the pipeline to Russia, as Moscow has pushed for in the past.

Yanukovych's opponents, however, used the agreement to make accusations that the pro-Kremlin president was selling out Ukrainian interests to Moscow.

Yulia Tymoshenko, Yanukovych's defeated rival, vowed she would do everything in her power to annul the agreement in parliament. Meanwhile, ex-president Viktor Yushchenko's Our Ukraine party called for Yanukovych's impeachment.

"This is a fight for Ukraine," said former speaker of parliament, Arseniy Yatseniuk, adding, "Today we have to decide if Ukraine is a truly independent state or simply a territory with a coat of arms, flag and borders, but without an international voice."

President Yanukovych defended the new plan, and gave an assurance that nothing had changed in Ukraine's goal of EU integration and its policy of maintaining an equal balance with East and West.

"My aim is that, in the triangle of EU-Russia-US, Ukraine will find its place and its national interests. We have to find an equilibrium," Yanukovych stated.

While top-ranking Russian and Ukrainian politicians declared the agreement to be in the best of both countries' interests, the Russian daily Kommersant attributed Russia the upper hand, concluding that "Russia has demonstrated that the gas pipeline remains its all-time favorite political weapon…A path to NATO will remain closed for Ukraine for a long time."

Thursday's deal marked a dramatic turnaround for Russian-Ukrainian ties. Under the last Ukrainian government, the relationship became so strained that Medvedev refused to meet with Yanukovych's pro-Western predecessor Yushchenko.

As Ukraine celebrates the 18th anniversary of its independence from Soviet rule, the shadow of its former Communist past still hangs heavy. Moscow still seems determined to have a say in how things are run in Kyiv. (24.08.2009)