Ukraine: Could neutrality really be an option? | Europe | News and current affairs from around the continent | DW | 25.03.2022

Ukraine: Could neutrality really be an option?

Russia has demanded that Ukraine rule out NATO membership. But even neutral countries in Europe are now considering joining the military alliance. 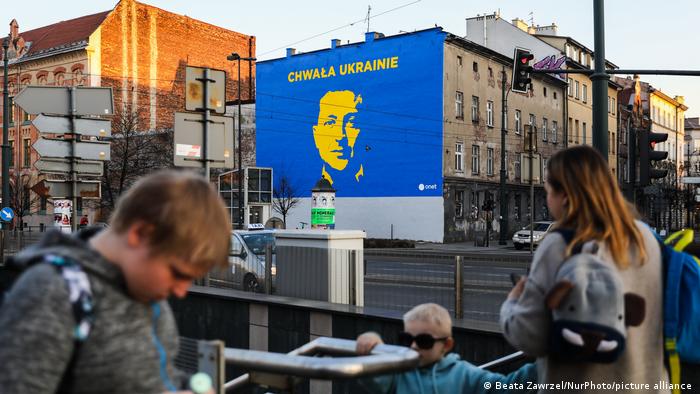 The mural reads 'Glory to Ukraine' — can neutrality help end the war?

A neutral Ukraine — that's what the Russian government touted as a way to endthe current conflict. "This is a variant that is being discussed and could be seen as a certain compromise," Kremlin spokesman Dmitry Peskov said in March during negotiations.

Ukraine pledged neutrality when it gained independence in 1991, but changed tack after Russia's annexation of the Crimean peninsula in 2014. Ukraine's parliament voted by a large majority to amend the constitution and made membership in the European Union and in NATO into a state objective.

But not only Russia wants to prevent this. NATO has consistently refused the application, fearing this would trigger a military confrontation with Russia. And now Ukrainian President Volodymyr Zelenskyy has admitted that the goal of joining NATO is probably unattainable.

Three neutral countries are often cited as possible role models for a neutral Ukraine: Austria, Sweden, and Finland. But they each have a distinctive history.

Austria, like Germany, was occupied by the four Allied powers at the end of World War II: The US, the Soviet Union, the UK, and France. The Soviet Union agreed to withdraw on the condition that Austria commits itself to "eternal neutrality," which was then enshrined in the country's constitution in 1955. 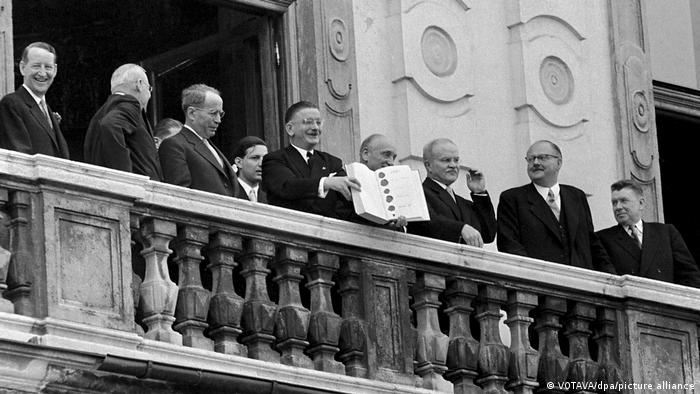 The Austrian State Treaty reestablished Austria as a sovereign state. It was signed by the Austrian, French, UK, US, and the Soviet governments in 1955.

Leos Müller, a historian at Stockholm University and author of the book "Neutrality in World History," described Austria's situation as "neutrality from above."

But Sweden, unlike Austria, chose to opt for neutrality. It has been neutral for more than 200 years, since the country had to cede Finland — which was then Swedish territory — to Russia, following a war in 1809.

Finland won independence in 1917 when the Russian revolution put an end to imperial rule, and it was later able to defend its independence from the Soviet Union. "We would not have kept our sovereignty," former Finnish Prime Minister Alexander Stubb told DW, "without a self-declared, pragmatic neutrality that was in no way ideological."

But, as Stubb explains, Finland was in a difficult situation for decades because the Soviet Union refused to officially recognize its independence. "The space of Finnish security politics and international decisions was very limited during the Cold War and that made us feel very uncomfortable of course," Stubb said. "But I think we played it smartly."

But this neutrality seems to have eroded over time. Austria, Finland, and Sweden have not joined any military alliance, but together they became members of the European Union in 1995. And the EU also has a common foreign and security policy with military elements, and this week EU foreign ministers agreed to set up a rapid response force of up to 5,000 soldiers.

Those two countries are also currently participating in the large-scale exercise "Cold Response," involving some 30,000 soldiers from 27 countries from March 14 to April 1, in northern Norway, only a few hundred kilometers from the Russian border. This maneuver had been planned long before the war in Ukraine and Russia began, but now it has taken on a special significance. 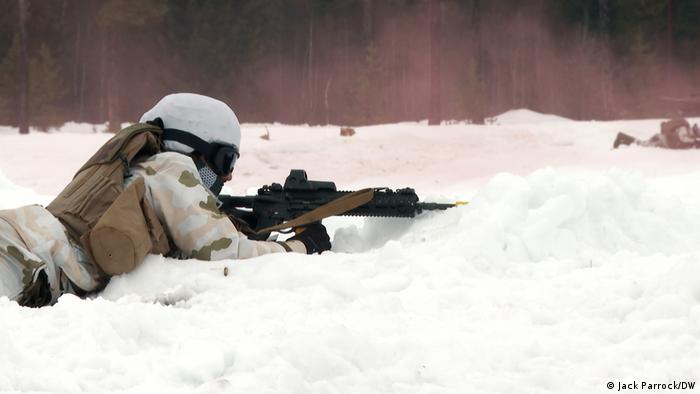 Finland in favor of joining NATO

The war in Ukraine has led to a rethink in Sweden and Finland, as they feel "strategically exposed" to Russia now, says Leos Müller. Finland has a long border with Russia, while right across the Baltic Sea, NATO members Estonia and Latvia, which have large Russian-speaking minorities, have become extremely worried for their own safety. And the Russian exclave of Kaliningrad holds a base for medium-range missiles situated on the Baltic Coast only 800 kilometers from Helsinki and Stockholm.

Sweden and Finland are now discussing whether they should give up their neutrality and join NATO. They would then be protected by the alliance's Article 5, which states that an attack on one member of NATO counts as an attack on all of its members and would trigger defense responses.

Finland's Stubb believes that Finland is now about to apply for NATO membership. "It's not a question of if, but when," he said. According to recent polls, 62% of Finns are now in favor of membership, with only 16% against. "The process in government and in parliament has been set in motion. The train has left the station. Its final destination is going to be the headquarters in NATO," Stubb said.

Germany's Chancellor Olaf Scholz has already said that a Finnish bid to join NATO would be "most welcome."

But Leos Müller in Stockholm is less certain. In Sweden, only 41% support accession to NATO, while 35% are opposed, and Müller believes the issue of NATO membership will top the agenda in the Swedish parliamentary elections in September. Since the outbreak of the war, the mood has changed a lot, Müller says, and he believes if both Sweden and Finland decide to join, then they will do it together, in a coordinated move.

There has been no comparable movement in Austria so far, but Austria is in a very different geo-strategic position. 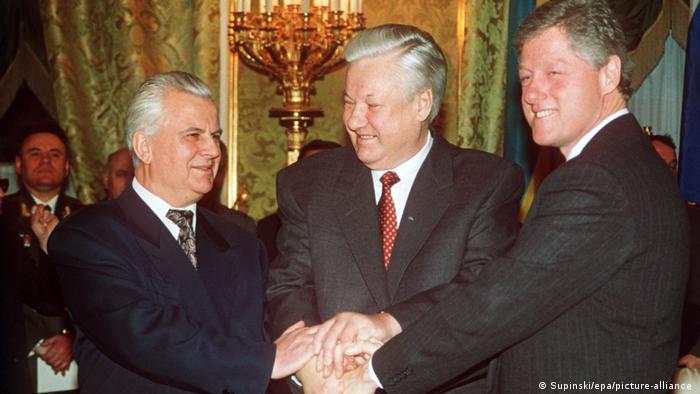 In 1994, Ukraine gave up its nuclear weapons. In return, Russia, the US and the UK pledged to respect Ukraine's sovereignty and borders.

Demilitarization not an option

And the wider point is that if Sweden and Finland do seek to give up their neutrality because of the Russian threat, they cannot serve as models for a neutral Ukraine.

Leos Müller believes that neutrality would not work for Ukraine anyway: Other states or international organizations, such as the United States, Russia, or NATO, would have to safeguard that neutrality and protect Ukraine in the event of an attack. "That requires functioning international law, functioning agreements and organizations. But now, Russia has broken with all of that."

Moreover, Russia is demanding "demilitarization" of Ukraine — "an unthinkable demand for a neutral country," Müller believes. Like Sweden or Switzerland, even a neutral Ukraine would still need defense capabilities.

Ukraine has already found out that international guarantees can turn out to be worthless: In 1994 in the Budapest Memorandum, it committed itself to give up the nuclear weapons on its territory after the break-up of the Soviet Union. In return, Russia, the United States, and the UK pledged to respect Ukraine's sovereignty and borders. Twenty years later, Russia annexed Ukraine's Crimean peninsula and the two Western powers allowed it to happen.

Stubb feels this is both historic and dramatic. "For me, this is the 1914, 1939, or 1989 moment of our generation. So basically, the 30 years of relative peace and this strong belief that connectivity will bring the world together is now over, especially here in Europe."

Stubb expects Europe to be divided for many years to come. "It will be a new iron curtain between Russia, which is authoritarian, totalitarian and aggressive, and the rest of Europe, which is peaceful, democratic and international. So this means that Russia, which throughout history has always thought of itself as isolated and under attack by the rest of the world, will now be fully and utterly isolated."

Stubb says that because nothing lasts forever, the West would at some stage start engaging with Russia again, but for now "this is a truly dramatic moment because I fully realize that it is very unlikely that we will have any connection with our neighbors for the foreseeable future."

Ukraine-Russia war: What could be a way out?

The Russian war against Ukraine seems to be intensifying. Who can put an end to fighting — and how?

The US became the latest NATO member to support Helsinki and Stockholm joining the alliance. President Joe Biden hailed the 95-1 bipartisan vote as "historic."