Russia, Ukraine and representatives of the OSCE are meeting in Belarus in an attempt to initiate peace talks. The group will discuss withdrawing military equipment from eastern Ukraine and the exchange of prisoners. 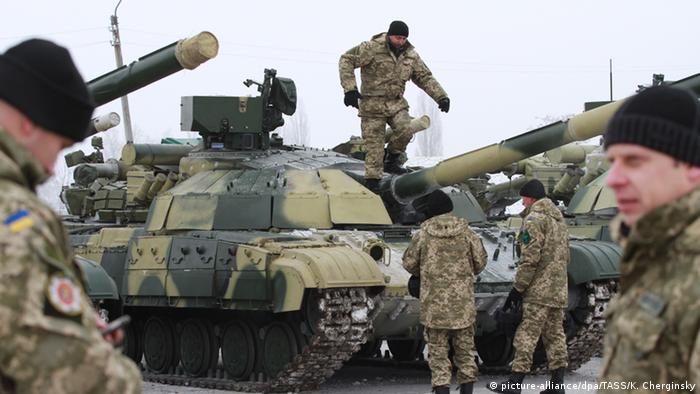 Peace talks between Ukraine and pro-Russian rebels are to resume Wednesday in Minsk, the capital of Belarus. Envoys from Russia and the Organization of Security and Cooperation in Europe (OSCE) will also be present at the meeting, which is scheduled to begin at 1500 hours (1200 GMT).

Diplomats gathering in Minsk will discuss a lasting ceasefire, withdrawing heavy arms and exchange of prisoners, the OSCE said. The peace talks will also include negotiations on providing humanitarian aid to eastern Ukraine, which is being controlled by pro-Russian rebels.

Russia and the rebels are also demanding an end to the economic embargo in Donbass, the capital of the breakaway territory under rebel control.

However, progress is doubtful after Kyiv passed a resolution in parliament on Tuesday, relinquishing its non-aligned status and paving the way for its membership in NATO.

Russia's reaction to Ukraine's new stance has been one of anger. On Wednesday, Defense Minister Anatoly Antonov accused unidentified NATO members of pushing Ukraine to turn it into a "frontline for confronting Russia." Russian news agencies quoted Antonov as saying: "Under the slogan of a 'Russian threat,' NATO is expanding its military potential in the Baltics, Poland, Bulgaria and Romania."

Earlier on Tuesday, Prime Minister Dmitri Medvedev said that "in essence, an application for NATO membership will turn Ukraine into a potential military opponent for Russia." Foreign Minister Sergei Lavrov also reacted to Kyiv's decision, saying it was "absolutely counterproductive," and that Ukraine needed to "put and end to the confrontation."