Ukraine has accused pro-Russia separatists of breaching the ceasefire that came into effect over the weekend. The EU has extended a list of individuals and entities subject to sanctions over the Ukraine crisis. 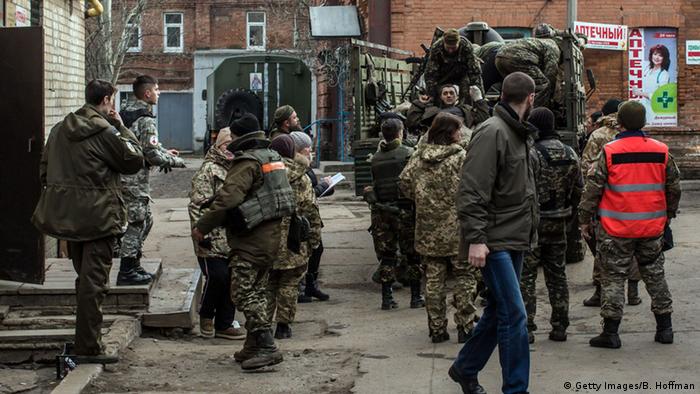 Ukraine's foreign minister, Pavlo Klimkin, told reporters in the Bulgarian capital, Sofia, on Monday, that pro-Russia separatists had breached theceasefire agreed in Minsk last week more than 100 times since it came into force.

"We and the Ukrainian military forces are fully observing the ceasefire regime, but unfortunately in the past 24 hours there have been 112 attacks from the terrorists from Donetsk and Luhansk," Klimkin said.

Despite this, he insisted that Kyiv remained committed to the Minsk agreement.

"What is necessary now is a stopping of the fire, a withdrawal of the heavy artillery and a start of the exchange of prisoners so that humanitarian aid can get to the people and they receive at least medications and foodstuffs and we can start the political process again," Klimkin said.

However, the separatist military spokesman Eduard Basurin accused government forces of hitting Horlivka, a town under rebel control, with an artillery attack overnight. The government side has blamed this on the rebels.

Fighting was reported to be continuing around the government-held town of Debaltseve, which is surrounded by rebel fighters. The separatists have said that the ceasefire did not apply to the railway hub, which connects the two main rebel towns, Donetsk and Luhansk. The government has said that it is part of the truce deal.

Meanwhile, the European Union has added 19 more individuals to its list of people it accuses of helping to stoke the fires of conflict in eastern Ukraine. All are subject to asset freezes and travel bans. Nine entities have also been added to the list for their alleged links to the fighting in eastern Ukraine.

The additions bring the total number of individuals hit with travel bans and asset freezes to 151 while 37 entities are now subject to restrictive measures.

The first day of the new ceasefire in eastern Ukraine has mostly held. Fighting continued in Debaltseve, which pro-Russian separatists claim as their territory. (15.02.2015)