UKIP′s deputy chair on Brexit: ′A huge gamble for both sides′ | Europe| News and current affairs from around the continent | DW | 31.05.2016

UKIP's deputy chair on Brexit: 'A huge gamble for both sides'

On this week's Conflict Zone, Diane James, member of European Parliament and deputy chair of UKIP, discusses the June 23 EU referendum in the UK.

British politicians are in full stride of the final sprint campaigning for, or against, withdrawing the United Kingdom from the European Union. The lead-up to June 23 vote has divided the country and given rise to openly xenophobic sentiments. For the UK Independence Party (UKIP), it’s the culmination of years of populist skepticism about the European experiment.

In conversation with Tim Sebastian, the member of European Parliament and deputy chair of UKIP, Diane James, lambasted the European Union as "a failure," saying: "I would describe it as an organization that’s run out of steam compared to its original concept."

Recent polls have shown that those who want to stay in the EU are in the lead, with 53% of voters. Still, the lead has only developed in the last few weeks and James said she believes the vote will be close. Campaigners on both sides are out drumming up votes with fervor.

"I’m still a great believer that there is everything to play for," she said. "I think it will be a good result." Leader of the United Kingdom Independence Party (UKIP), Nigel Farage poses for photographers holding a British passport at the launch of the party's open-top bus that is touring the UK for the campaign to leave the European Union.

Though Britain has been divided down the middle by the vote, the groups on either side are hardly united. On Monday, Labour's London mayor Sadiq Khan and Conservative Prime Minister David Cameron made strange bedfellows when they campaigned against Brexit together. And Leave campaigners are similarly at-odds when it comes to many other issues.

Tim Sebastian asked James about the state of the Brexit campaign, saying, "You seem to be fighting almost like ferrets in a sack. We have this vitriol from one exit campaign to another exit campaign. Nigel Farage on May the 20th spoke of the 'cretins in charge of Vote Leave' and accused them of bad-mouthing him. Aaron Banks of Leave EU said of the other Brexit team, 'I wouldn’t put them in charge of the local sweetshop.'"

Instead, she said: "Politics has entered into the scenario of entertainment." The circus around Brexit, she continued saying, was causing exactly what was hoped for, "lots of interest."

That doesn’t mean she always agrees with her own party. James rejected a key figure of the Brexit campaign, that the EU costs Britain 350 million pounds per week. James responded that she agreed that 350 million was too high.

"It's a figure that Nigel Farage has used many times," said Tim Sebastian. "And he's the leader of your party." 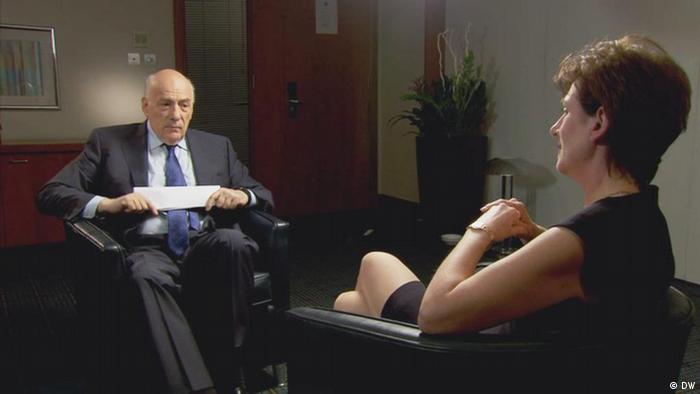 Diane James had a host of criticisms for the European Union but little to offer in terms of a British future outside of the EU. She bashed the EU over laws that held sway over Britain, said too much money was sent to other countries and chastised the EU for poor negotiating, saying Turkey "managed to hold the EU to ransom over the migration crisis."

Some of the most urgent criticisms of Brexit involve unforeseen risks of leaving the EU. In recent months, G-7 finance ministers have warned about possible economic damages and a Greek minister warned about dangers for handling the refugee crisis, not to mention Brits who have recently scrambled to get German passports.

Tim asked her if she really understood the risks: "The most momentous decision the British are being required to take in 40 years and you don’t know what the risks are. So it’s sort of 'fly with me and we’ll see what happens,' isn’t it?"

"Hopefully is a big word, isn’t it?" asked Tim. And James responded that the current government hasn’t truly been considering the risks of staying in the EU.