Hundreds have attended a rally in northeastern England under the banner of German-based "anti-Islamization" group PEGIDA. The protest was dwarfed by a counterdemonstration, with police keeping both sides apart. 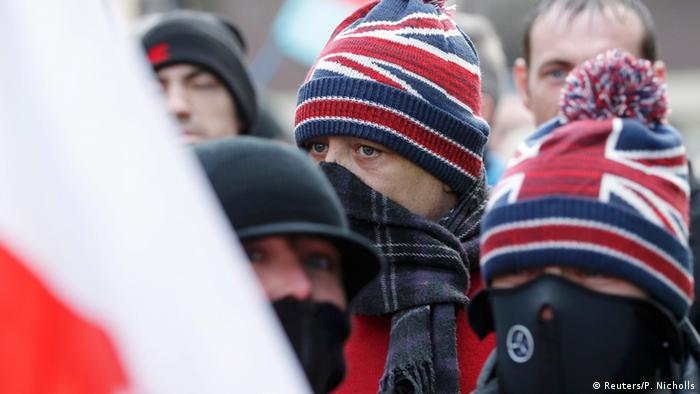 The latest PEGIDA-inspired demonstration took place in the English city of Newcastle attracting 400 people according to a witness cited by the Reuters new agency.

However, a counterdemonstration drew more than 2,000 people, with a large number of police deployed to separate the sides. Opponents of the group claim that it is inherently racist and Islamophobic.

The rally was the first in Britain to be held under the flag of PEGIDA (which stands for Patriotic European Against the Islamization of the West). More than 800 people indicated on the group's Facebook page that they would attend.

"We are not anti-Islam. We are not here to split up any communities," PEGIDA spokeswoman in Britain Marion Rogers was reported as saying by the BBC. "We've invited Muslims to join us against extremism, extremism of any kind. I don't think it's wrong to stand up to terrorism. Is that hate?"

Among those taking part in the counter-protest was German Social Semocrat MEP Arne Lietz, who was pictured (left) with British opposition Labour Party member of parliament Chi Onwurah.

"It is absolutely extraordinary that a German organization sets up in the UK - it's not as if there is a lack of right-wing nutter organizations here," he said. "They have got to be opposed, wherever they are."

A homegrown British group that protested against the perceived threat from Islamic extremism, the English Defence League, held numerous protests throughout 2013. Those protests often ended in confrontation with anti-fascist demonstrators, and the group lost momentum after its leader quit.

PEGIDA demonstrations in several German cities have drawn large crowds of supporters and opponents, with more than 25,000 PEGIDA supporters attending one of the group's weekly rallies in the eastern city of Dresden.

Similar demonstrations were also held in Austria and Sweden, although turnout at those protests was also dwarfed by counterdemonstrations.