Sweden's offshoot of the PEGIDA movement has held its first demonstration, albeit with little success. Counterdemonstrators outnumbered and outshouted the main event in the southern city of Malmo. 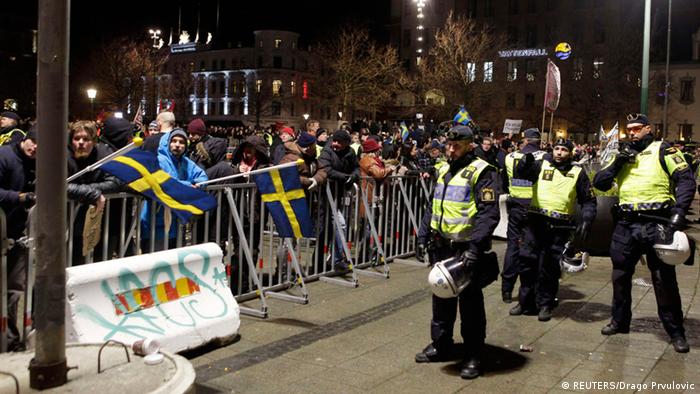 Sweden's PEGIDA chapter turned out on Monday night for its first rally in a bid to draw attention to what they say is a need to tighten immigration restrictions in the Scandinavian country.

"There is an unmet need for this in Sweden. It's not about racism, it's not about shutting out immigrants. It's about our values and traditions," said PEGIDA's Swedish leader Henrik Roennquist.

The movement, which stands for Patriotic Europeans Against the Islamization of the West, began in the eastern German city of Dresden last October. Before its leadership crumbled in recent weeks, the German movement saw a steady growth in popularity, drawing out a record 25,000 supporters on January 12.

A clear 'No' to PEGIDA

However, the Monday night demonstration in Malmo reflected less of the Dresden phenomenon and more of the reaction across other German cities in recent months, with counterdemonstrators vastly outnumbering PEGIDA supporters.

Between 3,000 and 4,000 people turned out to speak out against what they deem a racist movement, while police estimated that only 30 PEGIDA supporters showed up.

"The support is much greater than that," said public broadcaster SVT, putting the number at 150 supporters.

Reporters on the scene also said that anti-PEGIDA demonstrators shouting "No racists on our streets!" and other slogans served to drown out the main rally, making it impossible to hear anything that was being said.

Police intervened during the demonstration when people from the counter rally began throwing firecrackers toward PEGIDA supporters, who were restricted to a fenced-in area. No injuries were reported.

According to news agency AFP, a nearby Lutheran Church held a prayer service beforehand for solidarity with Muslims in Sweden.

In Sweden, the number of asylum seekers jumped between 2012 and 2014 from roughly 45,000 to just over 80,000, according to the Swedish Migration Board, with Syrians constituting half of all asylum seekers last year. The number of refugees granted protection increased by 25 percent between 2013 and 2014.

Some 200 Danes wielding torches and placards marched in Denmark's first anti-Islam PEGIDA rally amid concerns the country could be targeted by Islamic extremists. Malcolm Brabant reports from Copenhagen. (23.01.2015)