PEGIDA Denmark takes cue from Germany | Europe | News and current affairs from around the continent | DW | 23.01.2015

Some 200 Danes wielding torches and placards marched in Denmark's first anti-Islam PEGIDA rally amid concerns the country could be targeted by Islamic extremists. Malcolm Brabant reports from Copenhagen. 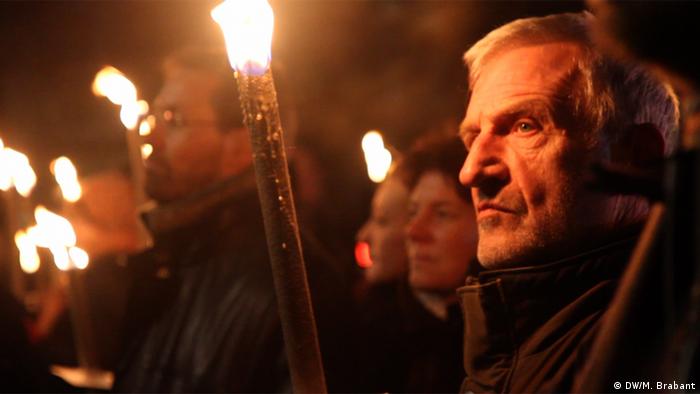 The symbolism of the night took place next to Denmark's most iconic figure.

Normally at this time, the tiny statue of the Little Mermaid, sits demurely on her rock, deserted by tourists, frozen by the wind and the lapping Baltic Sea.

But suddenly she was bathed in a light of burning torches, carried by some 200 anti-Islamists, who had brought Germany's anti-Islam PEGIDA movement to Scandinavia.

A young man danced in front of Hans Christian Andersen's fairytale heroine, waving a placard declaring "No to fundamentalist Islam."

"Get Dannebro," shouted an older man, using the name for the Danish flag with its white cross on a red background, and one was quickly produced.

The younger man held his props aloft and score of flashbulbs exploded to capture the moment. 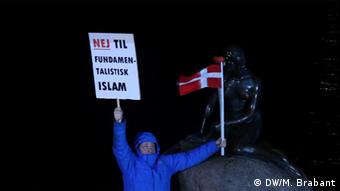 Back from the water's edge, a bearded man strummed a guitar and the crowd began to sing a Norwegian song from 1936 called "Surrounded by enemies."

It was the melody that Norway sang in September 2011 to mourn victims of the right-wing fanatic Anders Breivik, who murdered eight in Oslo with a car bomb and then 69 young people with an assault rifle on the island of Utoya.

The singing was interrupted by angry shouting.

Some protestors had noticed that a handful of Muslims had infiltrated the crowd.

"We're being attacked by the neo-Nazis," said one young man, before being led away by police for his own protection.

"They think we're all Arabs," said the object of the old man's fury, who asked to remain anonymous. "But I'm a Kurd. I'm a Muslim, and I believe in the power of God. We just wanted to listen to the speeches. People say they are demonstrating for free speech, but they are pushing us and we can't even say what we want to."

This was the closest the demonstrators came to violence. During the two-hour long walk from the National Art Museum to the Little Mermaid and back, the PEGIDA supporters were shepherded by riot police who kept anti-racist counter-protestors at bay. On occasions, the rival factions were close enough to hurl insults at each other.

"F--- Islam," shouted one demonstrator, bridling at being called a fascist.

German Chancellor Angela Merkel's claim that the followers of the PEGIDA movement, founded in the eastern city of Dresden, have coldness, prejudice and even hatred in their hearts, rankles the Danes here.

"I don't have hatred in my heart," says Danish organizer Nicolai Sennels, laughing. "And I don't think Merkel is clairvoyant. She doesn't know what's in people's hearts."

Sennels was once a candidate for the anti-immigrant Danish People's Party, which won the most votes during last year's elections for European Parliament. Among his previous attacks on Islam was a suggestion that in order to rid the country of fundamentalists, the government should ban the sale of halal meat.

"The threat from Islamists is very big, if we ask the police and they should know," he said. "We've just had attacks in Belgium and France, and Interpol just announced we'll have 5,000 fighters from 'Islamic State' entering Europe in the coming months and we cannot keep them out." 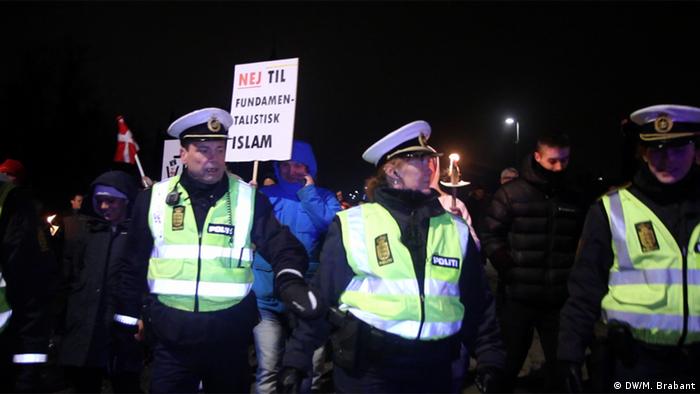 Outside the museum, PEGIDA supporter Nina Moskaer declared, "I definitely don't see myself as a racist. I just see it's going to be like 'Denmarkistan' instead of Denmark, and that we're going to be a minority in my own country if we don't do something about the borders and who we are letting in."

"Islam doesn't bring any good to anyone, not to any countries anyway," said Lars Larsen, lighting up a torch. "I can't mention one Islamic country where you have welfare, where you have democracy, where you have freedom of speech, and those are some values that I would like to fight for.”

Across Copenhagen, in the predominantly immigrant district of Norrebro, a large gathering of counterdemonstrators held up signs saying "Refugees and Muslims are welcome." 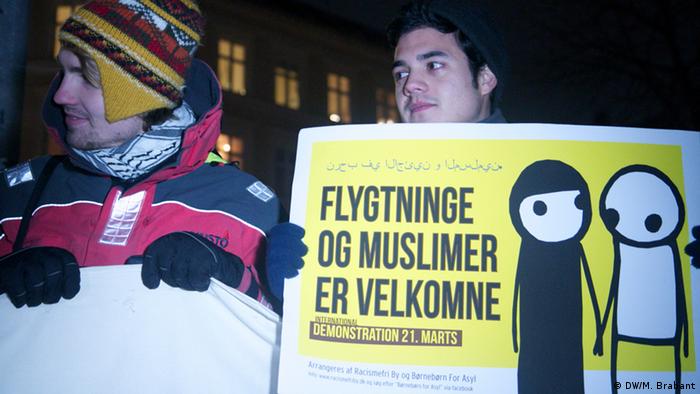 "Somebody has to stand up to this," said Dorthe Guldfeld. "There are not so many extremists, you know, but every time there is something all Muslims are blamed. All Muslims have to explain themselves - and that's not fair."

Clutching a placard depicting a refugee clad head to toe in black, Pernille Cauchi said: 'I think PEGIDA is using an opportunity to spread hatred and racism in Denmark and I'm against that.'

Danish Foreign Minister Martin Lidegaard expressed concern that the PEGIDA rallies would lead to divisions within a society that is struggling to achieve better integration of its 250,000 Muslim citizens, who comprise about four percent of the population.

"I don't think PEGIDA will have major traction in Denmark in terms of followers," says Professor Magnus Ranstorp, a lecturer at Sweden's Defense College and a specialist in extremism.

But the Danish authorities are desperately concerned about the country being targeted by Islamic extremists in reprisal for the publication in 2005 of 12 Mohammed cartoons by the Jyllands-Posten newspaper and for the country's participation in the "war on terror" led by then US President George W. Bush as well as the current air campaign against the "Islamic State" group in Iraq.

The government is fast tracking proposals to crack down on radical Islamists contemplating fighting in Syria.

A new law, currently being debated and expected to be introduced in March, will enable the police to seize the passports of those suspected of being jihadists.

One opposition proposal is to require an exit visa for Syria, a device that is usually only employed by totalitarian regimes.

Most MPs want the law to have a so-called sunset clause so that it can be repealed when the danger has passed.

One Dane who knows more than most about extremism is Naser Khader, a former member of the Danish Parliament who was born in Syria. He has round the clock protection from the security agency PET after receiving death threats from Islamists. 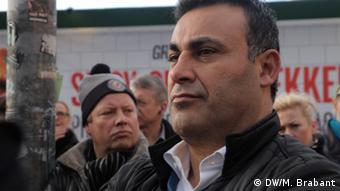 Khader was at a poorly attended demonstration to show support for Jyllands-Posten, a newspaper whose editor has acknowledged he doesn't dare publish the Charlie Hebdo cartoons.

He declined repeating the epithet of the Moroccan-born mayor of Rotterdam, Ahmed Aboutaleb, who, last week, told Muslims who didn't value Western freedom to "f--- off."

"You can stay even if you don't like freedom, but don't kill people, don't threaten people," Khader said.

"I've observed that a growing number of young Danish Muslims have begun to understand what democracy is about, what freedom of speech is about," he said. "I've not seen as many democratic Muslims as we see now."

Nicolai Sennels is not so sure. Despite the poor turnout, he regards the PEGIDA demonstration as a success and says it will be repeated on a weekly basis.

As for those photographs at the Little Mermaid, publishers had better beware. They may get a demand for a royalty payment from the family of sculptor Edvard Erikson, which aggressively protects the statue's image rights. That's why pictures of Hans Christian Andersen's most famous character rarely appear in her homeland. Free expression? Not with the Little Mermaid. It comes at a cost.

The PEGIDA protest movement has sparked a fundamental debate in Germany: the right to demonstrate. However, the group's drama shouldn't be taken that seriously, says leading sociologist Dieter Rucht. (19.01.2015)

For the first time, India has recorded over 4,000 coronavirus-related deaths in a day. Three southern states have declared fresh lockdowns due to a surge in cases. Follow DW for the latest.