British Finance Minister Philip Hammond has announced that Britain's economy grew stronger than expected. The budget speech came as the UK prepares to trigger Article 50 of the Lisbon Treaty to leave the European Union. 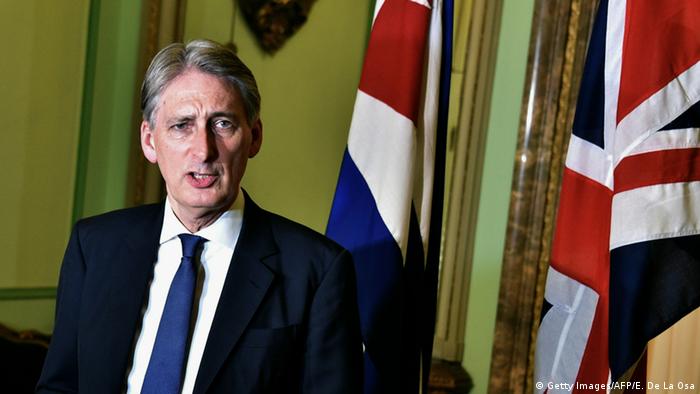 Chancellor of the Exchequer Philip Hammond said in his budget update that the UK's annual gross domestic product (GDP) growth would come in at 2.0 percent this year - considerably higher than the government's previous 1.4 percent forecast. The trend implied that the UK economy had performed better than predicted after the June 2016 referendum in favor of leaving the EU.

In order to factor in the remaining uncertainty of the impending launch of Brexit, a prior first estimate of 2.2 percent had to be downgraded. The numbers were presented in consort with the Office for Budget Responsibility (OBR).

"As we prepare for our future outside the EU we cannot rest on our past achievements," Hammond told parliament as he highlighted a number of new measures for 2017.

"As we start our negotiations to exit the European Union, this budget takes forward our plan to prepare Britain for a brighter future," Hammond told the House of Commons.

"We must focus relentlessly on keeping Britain at the cutting edge of the global economy. The deficit is down, but debt is still too high," he added. The government meanwhile also unveiled plans to pump more than 500 million pounds (575 million euros, $607 million) into Britain's education system, building new schools and renovating others.

Hammond predicted, however, that UK growth would stand at 1.6 percent next year, down on a prior official estimate of 1.7 percent, as UK shoppers have reportedly turned more cautious with rising inflation. Hammond also downgraded GDP forecasts for 2018, 2019 and 2020. On the upside, he said he expected Britain to borrow less this year than initially expected.

Hammond was meanwhile criticized by small businesses for another change in the budget - that is hiking up National Insurance bills for the self-employed by 1 percent to a total of 10 percent starting in April 2018, and by another percent in April 2019. Many accused him of breaking a Conservative manifesto pledge not to increase VAT, National Insurance contributions or income tax.

Former Labour Party leader Ed Milliband simply retweeted a Conservative election pledge by then Conservative leader David Cameron, claiming there would be no such raises.

The government meanwhile defended the move saying it would raise 2 billion pounds (2.3 billion euros) over the next two years and help ease pressure on the social care system. National insurance contributions are designed to allow workers to qualify for certain benefits, including a state pension. 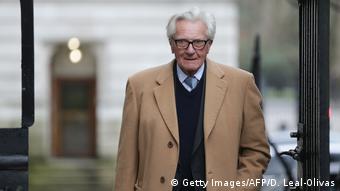 David Cheetham, chief market analyst with retail broker XTB said that the pound had "risen off its lowest level against the dollar since mid-January in the past few minutes after chancellor Philip Hammond announced upgrades to the GDP forecasts."

"Mr. Hammond has also stated that public borrowing will decrease significantly in 2017 to 51.7 billion pounds from the 68 billion seen previously in another development that has caused a mildly positive reaction."

Hammond meanwhile hopes to build up a reserve fund in case he needs to help Britain's economy through a Brexit slowdown ahead.

The positive budget report despite looming Brexit negotiations came on the heels of the House of Lords, the UK's upper house of parliament, voting in favor of a bill authorizing the start of Brexit negotiations - but with a key amendment requiring lawmakers, not just the government, to approve Britain's exit deal with the EU.

The 366-268 vote will now return to the House of Commons, the lower house of parliament, which likely will undo the change next week. British Prime Minister Theresa May's Conservative Party has a majority in the Commons, but not the Lords. A vote in the Commons earlier in the year gave May the mandate to launch the negotiations on her government's terms.

Following the vote, May fired veteran Conservative Party politician Michael Heseltine from various advisory roles, Heseltine was one of 13 Conservatives in the parliament's unelected upper house who had voted in favor of the amendment, which was originally proposed by the opposition Labour Party.

Heseltine, 83, said that May had "entirely the right" to sack him but added: "I'm sorry that the expertise which I have put at the government's disposal over the last six years has now come to an end".

Heseltine said that giving lawmakers a vote on the terms of Brexit would ensure "that Parliament has the critical role in determining the future that we will bequeath to generations of young people."

Prime Minister May plans to invoke Article 50 of the EU's Lisbon Treaty by March 31, triggering two years of exit negotiations. However, she will remain unable to do that until Parliament passes legislation sanctioning the move