The EU Commission has raised its outlook for the bloc's economic growth, saying Europe's recovery remains on track but is vulnerable to the "exceptional risks" of Brexit and the new US administration. 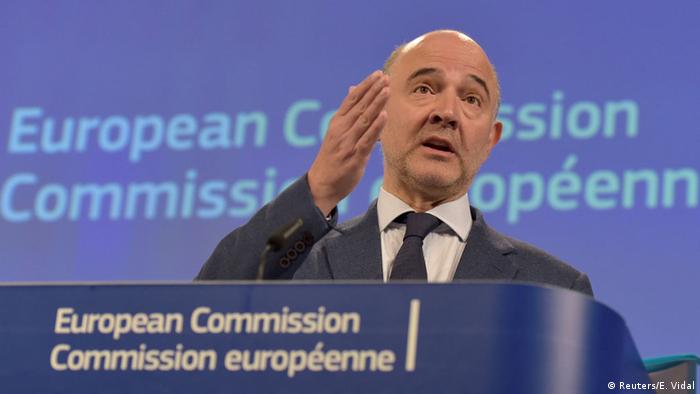 The European Commission published its winter economic forecast on Monday, slightly revising up its predictions for growth in both the euro currency area and the wider 28-nation EU.

Even though Europe was still navigating "choppy waters," Economic Affairs Commissioner Pierre Moscovici said the European economy had proven "resilient to the numerous shocks it has experienced over the past year."

As a result, the Commission sees the 19-country eurozone expanding by 1.6 percent in 2017 and by 1.8 percent in 2018, compared with predictions made in autumn of 1.5 percent this year and 1.7 percent in the next.

Fresh eurozone economic data show that inflation has risen to just below the ECB's key target, growth is accelerating and unemployment has hit a seven-year low, suggesting the bloc's economy is finally on the mend. (31.01.2017)

Inflation in the 19-member euro area has reached a new high. Consumer prices in December rose to a level not seen in more than three years, providing encouragement for ECB President Mario Draghi. (04.01.2017)

The report speaks of "exceptional risks" facing the recovery in Europe, stemming mainly from Britain's vote to leave the EU and uncertainty over the policies of US President Donald Trump.

"The particularly high uncertainty… is due to the still-to-be-clarified intentions of the new administration of the United States in key policy areas," it said, adding that the numerous elections to be held in Europe were also weighing on growth prospects.

In view of "uncertainty at such high levels," Moscovici called on political leaders to use "all policy tools to support growth."

Regarding Europe's fight against stubbornly low inflation rates, the Commission sees consumer prices only "creeping" higher over the next two years, as energy prices were rebounding from historic lows. At the same time, it warned the European Central Bank (ECB) against ending its massive stimulus program because it had strengthened the economic recovery in the past few years.

Overall, inflation in the eurozone is predicted to increase from a low 0.2 percent in 2016 to 1.7 percent in 2017 and 1.4 percent in 2018, with the Commission expecting increasing international pressure on the ECB to taper its stimulus.

Made in Germany - EU - is the common market falling to pieces?

Is the EU single market falling to pieces?