As the US airdrops supplies and weapons to Kurds fighting "Islamic State" (IS) militants, the UK has sent a group of soldiers to Iraqi Kurdistan to arm and train the peshmerga with heavy-duty machine guns. 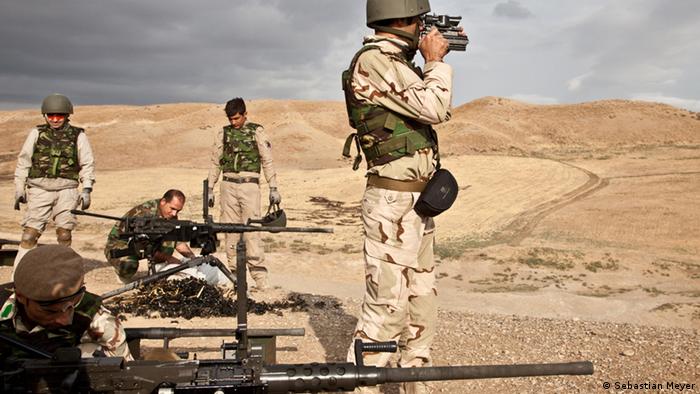 At the bottom of an arid valley in Iraqi Kurdistan, bullets crack as they fly toward their targets, sending clouds of dust flying. Overseen by UK soldiers from the 2nd Battalion Yorkshire Regiment, Kurdish peshmerga fighters are carrying out drills on new heavy machine guns in a secret location.

The UK has given 40 heavy machine guns and almost half a million rounds of ammunition, as well as non-lethal equipment such as body armour and helmets, to help the Kurds counter attacks by the IS militants.

Weapons and training are badly needed. Kurdish officials complain of being "outgunned" by IS fighters, who pillaged US weapons left behind as the Iraqi army retreated this summer.

Air strikes have helped, but militants continue to launch offensives against the peshmerga, while also besieging the Syrian Kurdish border town of Kobani, proving that they remain a potent danger.

Major Mark of the Yorkshire Regiment - the only British soldier allowed to be identified for security reasons - says that the new gun is more sophisticated than other weapons employed in the region. Combined with weapons and training from other countries, the machine guns will have "a tide turning effect" against IS, he says.

There is a thud, and the pile of spent bullet casings grows as men wait for their turn to fire. A young peshmerga fighter struggles to load the gun while one of the UK soldiers shouts orders at him through a Kurdish translator. 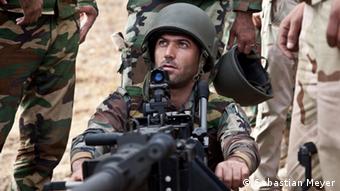 The peshmerga will have to learn fast

A different fighter, Zyad is 24 and a new recruit from Sinjar. His family now live in a camp in the northern city of Dohuk; they are part of the Yazidi minority and fled IS massacres in August.

Zyad says the attack on his home town, which he calls "a catastrophe," convinced him to join the peshmerga. "In Sinjar we need all the help and protection we can get," he explains, adding that he would like to see British and American troops fighting beside the peshmerga.

Despite RAF planes dropping bombs on IS targets in Iraq since late September, the UK has said it won't deploy ground troops, preferring instead to focus on supplying weapons and training the peshmerga forces.

Some of the British trainers are veterans of the Iraq war, but they are keen to point out that their role here is very different this time around.

The Major describes the Kurds' fight against IS as one of survival, against a "common enemy." In another mark of solidarity, one UK soldier has a Union Jack flag sewn to the breast of his uniform, just above the flag of the Kurdistan region; a bright yellow sun with a white, red and green backing. 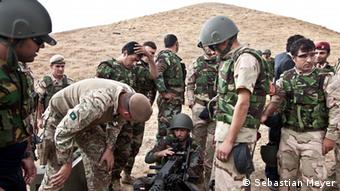 Coming together to combat a common enemy

The peshmerga, who had little recent battle experience before IS swept into Iraq, must now contend with the group shifting tactics. Peshmerga forces are increasingly facing surprise ambush attacks and finding hidden explosives.

Medical staff at one hospital in the Kurdish capital said that injuries due to improvised explosive devices (IEDs) are the biggest problem faced by the peshmerga.

Contractors hired by the British Ministry of Defence have now been brought in to teach the peshmerga how to defuse IEDs.

On a recent visit to the emergency hospital in Erbil, DW met Sgt Salah Muhammed, who was being treated for a sniper bullet wound to the abdomen. As he drifted in and out of consciousness, fellow fighter Hamid Abdullah stood beside him, still in his fatigues.

"We need everything," said Hamid, "body armour, weapons. We just have old Chinese weapons and IS have US weapons."

Back in the valley with the trainees, Major Mark is wrapping up today's activities. He says that when the training is finished and the weapons are deployed, they will be best used as anti-sniper weapons, targeting vehicles or buildings, where attackers may lay in wait.

Iraqi officers say that "Islamic State" fighters have used low-grade chemical weapons while fighting north of Baghdad. US Secretary of State John Kerry issued a warning about the severity of these allegations. (24.10.2014)

Turkey's president says Ankara will allow hundreds of Syrian rebels to join Kurdish forces defending Kobani from "Islamic State" militants. There are also plans for 200 peshmerga fighters from Iraq to travel to the town. (24.10.2014)

As the Kurds attempt to step up their operation against "Islamic State" fighters, more and more young women are being drafted to fight alongside the Peshmerga and other groups. DW accompanied them to the frontline. (04.10.2014)