British Prime Minister Theresa May has long said the free movement of labor will have to end, but a new document reveals how. The Home Office has proposed a two-tier system for European Union citizens. 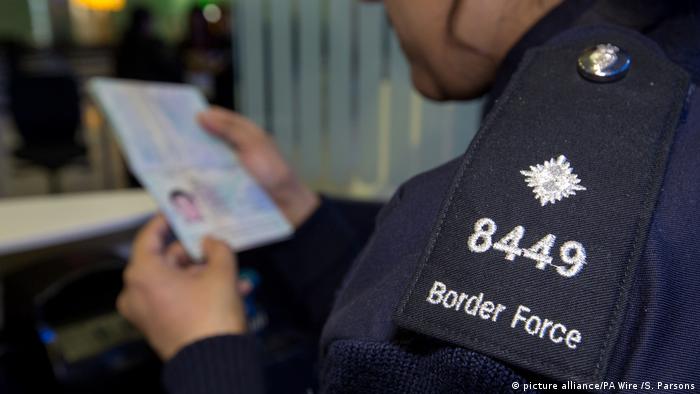 Britain intends to end the free movement of labor immediately after it exits the European Union and to place restrictions on lower-skilled EU migrants, according to a leaked government document published by The Guardian newspaper on Tuesday.

"Put plainly, this means that, to be considered valuable to the country as a whole, immigration should benefit not just the migrants themselves but also make existing residents better off," the document says.

The proposals also "tighten up" the definition of family members allowed to accompany EU workers in Britain, limiting it to partners, children under 18 and adult dependent relatives.

All EU citizens would be required to travel on a passport rather than the national identity cards that are currently allowed.

The Guardian said the document had been circulated to senior officials and ministers but had not yet been endorsed by Prime Minister Theresa May's top team of ministers.

The UK government told news agencies it did not comment on leaked documents.

"We will be setting out our initial proposals for a new immigration system which takes back control of the UK's borders later in the autumn," a government spokesman said.

May previously said the free movement of labor would have to end when Britain leaves the bloc, but the new document offers new detail on what kind of immigration system the government envisions.

The proposals hint at the idea of EU citizens having preferred treatment over their non-EU counterparts. "The future immigration regime for EU citizens will not necessarily be the same as the existing one for non-EU nationals. For example, we may wish to operate a preferential arrangement as part of any negotiated deal with the EU, either temporarily or permanently," the document reads.

"We will continue to encourage employers to invest in training and fill skills gaps within the resident UK workforce and take a longer-term view of this investment, ensuring that we continue to have a competitive edge in the globalized world," the draft document reads.

EU workers would be required to have a job offer in hand before entering the UK for work.

The measures would be implemented over a probable two-year period.

Four days of talks over Britain's planned departure from the European Union have come to end. But officials from both sides of the table have been critical of the lack of progress. (31.08.2017)

What Germans think about the Brexit negotiations

DW took to the streets of Berlin to find out what the mood is ahead of the start of the Brexit talks on Monday. Most say the EU and Germany are in the better position. (18.06.2017)