Four days of talks over Britain's planned departure from the European Union have come to end. But officials from both sides of the table have been critical of the lack of progress. 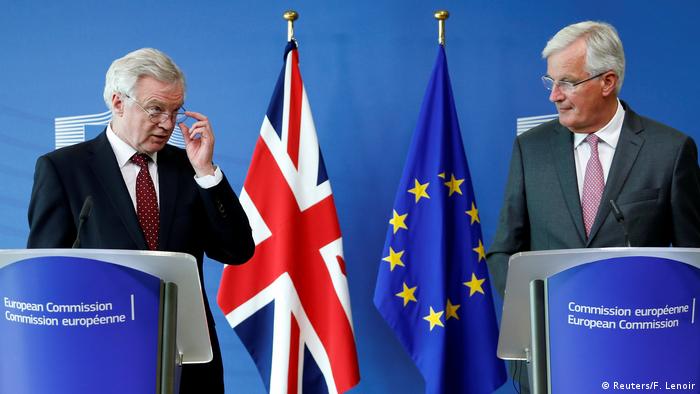 Britain and the European Union concluded their third round of Brexit negotiations in Brussels on Thursday after several days of public squabbling.

At a joint news conference with David Davis, the UK's Secretary of State for Brexit, the EU's chief negotiator Michel Barnier said the talks had not led to "any decisive progress on essential matters." Barnier reminded the UK that "time is pressing" and reiterated that the UK cannot be "outside the single market and shape its legal order."

He said there seemed to be a "kind of nostalgia" on the part of the UK to keep some of the benefits of the single market.

Davis, sounding confident and upbeat, called the talks "productive" and, unlike Barnier, focused on various technical details that he said had been achieved. He urged both sides to focus on being pragmatic and "put people above process." He conceded that there were still "significant differences to be bridged."

The two sides are hoping to progress on three main points - the UK's financial commitments to the EU, the rights of EU citizens in the UK and the status of Northern Ireland.

Talks started on Monday and within two days, both sides were publicly trading recriminations over a lack of progress. Diplomats told the Associated Press that talks had become more acrimonious.

The British complained that Barnier was made too inflexible by the EU's negotiating guidelines, which were laboriously agreed upon by member states.

Read more: Greece could use Brexit to recover Parthenon art

"It's quite difficult to negotiate with people who don't seem to have the flexibility that would allow them to negotiate," one British official was quoted as saying by the Reuters news agency.

Barnier rejected these suggestions in a post on Twitter, and renewed calls for clarity on Britain's wishes.

EU officials say that once potential compromises are identified, they can bring them to EU member states for appraisal.

British officials denied they were unclear on their desires and short on ideas. When talks started, Davis said that a series of British position papers were "products of the hard work and detailed thinking that has been going on behind the scenes not just the last few weeks but the last 12 months."

The UK is set to leave the European Union by March 2019. Barnier's and Davis's teams are set to meet again next month. A review of the talks is scheduled for October.

Britain's Labour Party has announced it backs the UK staying in the EU single market and customs union during a "transition period" after Brexit. The change in the policy comes days before the next round of Brexit. (27.08.2017)

An increase in EU nationals leaving the United Kingdom has pushed down the country's net migration, official data reveal. A drop of 51,000 people in net EU migration has brought the number to its lowest in four years. (24.08.2017)

British Prime Minister Theresa May has arrived in Japan in an effort to consolidate differing Brexit interests. The UK wants to lay the groundwork for a future trade deal, but Japan has other concerns. (30.08.2017)