A UAE space probe aboard a Japanese rocket has blasted off to begin its seven-month journey to the Red Planet. The Arab world's first interplanetary mission aims to collect data about the Martian atmosphere and climate. 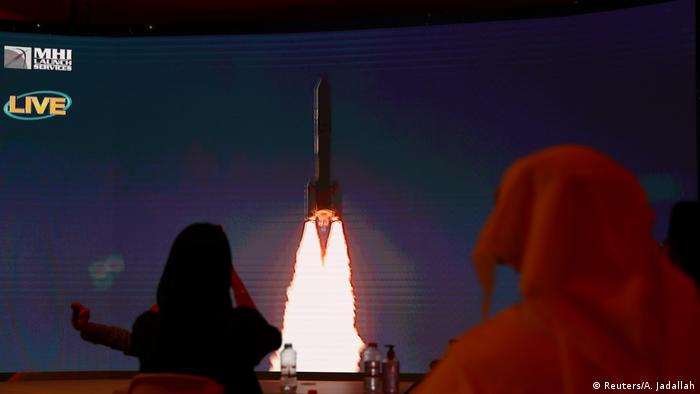 The orbiter is expected to reach its destination in February 2021, and is scheduled to spend at least two years circling the Red Planet. The unmanned probe is carrying instruments that will allow it to study the upper atmosphere and gather information about climate change on Mars.

According to the UAE, the mission will provide the first complete picture of the planet's atmosphere during different seasons.

The Hope orbiter, carried by a Japanese rocket, had been scheduled to liftoff on July 14, but the launch was delayed twice due to bad weather.

The UAE first announced plans for its mission to Mars in 2014. By developing a space program, it's seeking to move away from a reliance on oil and further develop local expertise in science and technology. The Emirates have also pledged to build the first human settlement on Mars by 2117.

"The Emirates' Mars mission is a message of hope to the Arab youth," Omar Sharaf, head of the Emirates Mars mission said in a video posted to Twitter on Sunday. "If a young nation like UAE is able to reach Mars in less than 50 years, then we can do much more as a region.''

The UAE has previously launched three observation satellites but had not gone beyond Earth's orbit.

With Tianwen-1, China will attempt to send both an orbiter and rover to explore Mars. Here's an overview of the facts. (02.07.2020)

Hope is the United Arab Emirates' first mission to Mars, and the country aims to use it to transform global science, the nation's space sector, and its economy. Here's what you need to know about the mission. (07.07.2020)

Russian President Vladimir Putin removed his longtime ally Dmitry Rogozin from the top post at Roscosmos, the Russian space agency. No reasons were given for the shakeup.