Firefighters near the French Riviera have been unable to gain the upper hand on blazes that have left one person dead and forced thousands to flee. Fires also continue to burn in Greece. Over 1,000 firefighters have struggled to contain a fire on the Mediterranean coast

Wildfires in the hills near the French coastal resort of Saint-Tropez have claimed the lives of at least two people, the regional government said on Wednesday.

"The battle is ongoing and the fire has not yet been contained," French President Emmanuel Macron said after visiting the area on Tuesday. "The coming hours will be absolutely decisive."

A total of 1,200 firefighters have tried to extinguish the flames of France's worst fire of the summer that has forced about 7,000 residents and tourists to flee their homes in the French Riviera area.

The blaze has killed at least two people and injured 24 others, including five firefighters, local prefect Evence Richard said.

Crews used high-pressure hoses and water-carrying planes to try to put out flames that were spread quickly by strong winds and high temperatures.

Authorities reported no new evacuations on Wednesday, but another 20 people had to be treated for smoke inhalation. 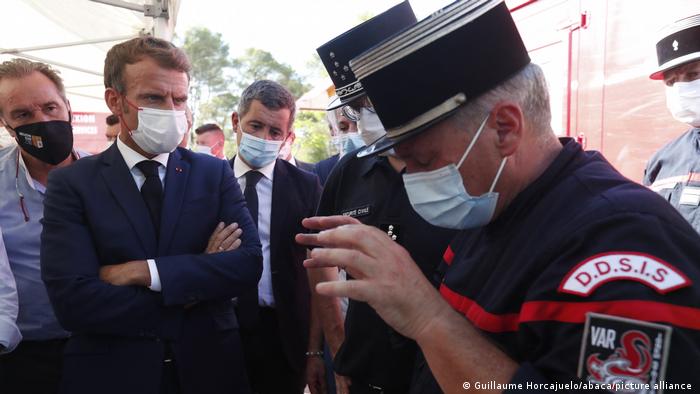 The blaze that broke out on Monday in the Plaine des Maures nature reserve had still not been stabilized, a government official reported.

Over 7,000 hectares (17,297 acres) of forests, vineyards and wild animals were burnt to cinders in just three days.

Frank Graciano, the Var fire service spokesman, said that although the fire "had not spread" throughout Tuesday night, "that does not mean it is under control."

"We will carry out the same basic work as yesterday by dropping water on the critical places," Graciano added.

What has Greece said about its blazes?

"Greece has always struggled to protect its rich ecosystem," Takis Grigoriou of the country's Greenpeace told the AFP news agency.

Scientists have put the blame on climate change and asked governments to invest in personnel, equipment and fire preparation.

"Firebreak roads in forests weren't prioritized by the different Greek governments because they didn't have a direct political impact," said Efthymis Lekkas, a professor of natural disaster management at Athens University.

Lekkas estimated the long-term cost of the forest fires to be €5 billion ($5.9 billion).

Even though only three people have died in the fires this year after a massive evacuation campaign, Diana Bell of East Anglia School of Biological Sciences in the UK, said wildlife has suffered extensively.

"Greece is home to more than 6,000 different species of plants and trees," Bell said. She said some of these are "not found anywhere else in the world."

Meanwhile, Israeli authorities reported Wednesday that a forest fire to the west of Jerusalem that started on Sunday and forced evacuations has finally been put out.

Wildfires in Greece and Turkey: DW reports on location