The "Islamic State" has claimed responsibility for the attacks, targeting the Kurdish strongold of Qashmili in Syria's northeast. At least 16 people were killed and around 30 more injured. 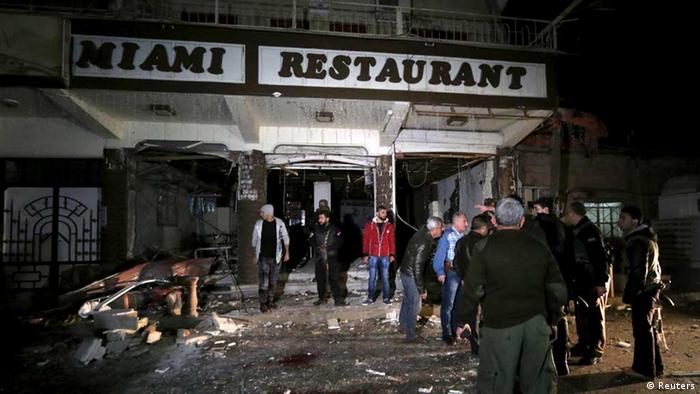 Kurdish news outlet Rudraw reported on Wednesday that two bombs were detonated near restaurants in a predominantly Christian quarter of Qamishli, which lies near the border with Turkey and close to Iraq.

The British-based Syrian Observatory for Human Rights also reported a third explosion, but provided no further information. Observatory director Rami Abdel Rahman told the AFP news agency that at least one of the blasts was caused by a suicide bomber.

Series of 'IS' attacks

Amaq news agency, which supports the so-called "Islamic State" (IS), said shortly after the attacks that the militant group had claimed responsibility.

"Dozens of dead and wounded in the bombings by the fighters of the Islamic State in different parts of Qamishli city," the news outlet said.

IS militants have launched a number of attacks on the Kurdish areas in recent weeks, including a similar one earlier in December which killed dozens.

Qamishli, which lies in the northeastern province of Hasaka, is currently under the shared control of the Syrian regime and Kurdish authorities, which have declared zones of "autonomous administration" across parts of north and northeast Syria.

The Syrian Kurdish militia YPG formally entered a US-backed alliance to fight IS in October. The coalition known as the Syrian Democratic Forces (SDF) also includes the YPG'S women's fighting force YPJ, as well as Arab rebel groups and tribes and a Syriac militia.

The alliance launched an offensive Hasaka shortly after joining forces. It succeeded in forcing IS out of a town near the Syrian-Iraqi border. Last Saturday, the SDF also wrested control of the strategic Tishreen Dam after making rapid advances south earlier in the week.

US warns Russia over civilian deaths in Syria

Secretary of State John Kerry says the US is concerned that hundreds of residents have been killed by Russian air raids. He conveyed Washington's worries in a phone call to his counterpart in Moscow. (30.12.2015)

The head of the most powerful insurgent group in the eastern suburbs of Syrian capital Damascus was killed in an air raid targeting the group's headquarters. Both rebel sources and the Syrian army confirmed the event. (25.12.2015)