Turkey's president wants to clear militants and YPG fighters from a 5,000-square-kilometer swath of northern Syria. Erdogan says his military's advance is going well, but observers say Turkish casualties are on the rise. 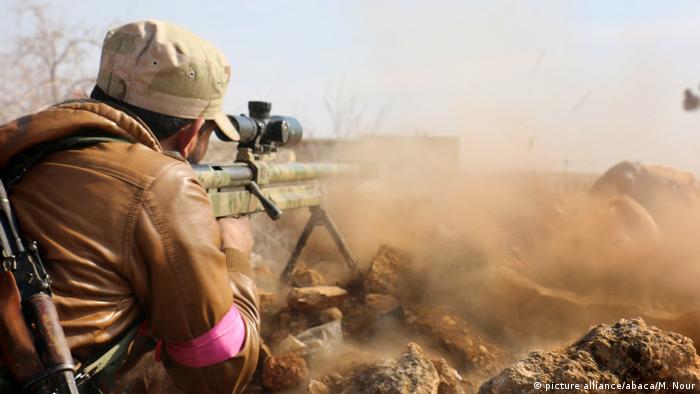 President Recep Tayyip Erdogan lauded the advance of Turkish troops into northern Syria in what he called a drive to cleanse a 3,000-square-mile swath of territory of militants and Kurdish fighters.

Turkish troops, in collaboration with Syrian rebels, have entered the "Islamic State" (IS) stronghold of Al-Bab, 30 kilometers (20 miles) south of Turkey's border.

Independent observers said Turkey's military controlled just 10 percent of the city and much of the suburbs north and west of it. They add that Turkish forces are meeting strong resistance, and that military casualties are on the rise.

One Turkish soldier was killed and three others were wounded in clashes on Sunday, according to the private news agency Dogan, which cited military sources. Smoke rises from an "Islamic State" position in al-Bab.

The death toll for Turkish troops fighting in Syria is now at 67. The three injured soldiers were evacuated from Al-Bab and taken to hospitals in Turkey's Kilis and Gaziantep provinces near the Syrian border, Dogan reported.

Erdogan painted a much rosier picture on Sunday during a press conference before departing for a tour of Gulf nations.

"Al-Bab is now besieged from all fronts," Erdogan said, adding that Turkey's forces had entered the city with Syrian rebels. It is "only a matter of time" before the allied forces take full control of the flash point town, he said.

"Daesh forces have begun leaving Al-Bab completely," he added, using an Arabic acronym for IS.

The Turkish army launched its military campaign - dubbed Euphrates Shield - inside Syra nearly six months ago, with the aim of clearing its border region of IS militants and Kurdish fighters.

Erdogan stressed that Turkey's incursion will not end with al-Bab, "which is not our final target." Troops would ultimately press on to Raqqa - about 175 kilometers southeast of al-Bab.

"The ultimate goal is to cleanse a 5,000-square-kilometer area," Erdogan said.

"Our final target is to clean the region from Daesh," Erdogan said. "Daesh's main center is not Al-Bab but Raqqa. Once Raqqa is cleared, this region will be a terror-free area."

Erdogan said he had already discussed his plans with US President Donald Trump earlier this week.

He also said Turkish forces had no plans to stay in Syria once the area had been cleared of both IS and Kurdish YPG militia fighters, whom his government sees as a hostile force.

Turkey has repeatedly called for a "safe zone" inside Syria supported by a no-fly zone, which officials believe could help alleviate the burden of accommodating Syrian refugees.

About 2.7 million Syrian citizens have sought refuge in Turkey during the nearly six-year civil war.