Turkish students charged with terrorist propaganda after peace rally | Europe| News and current affairs from around the continent | DW | 05.06.2018 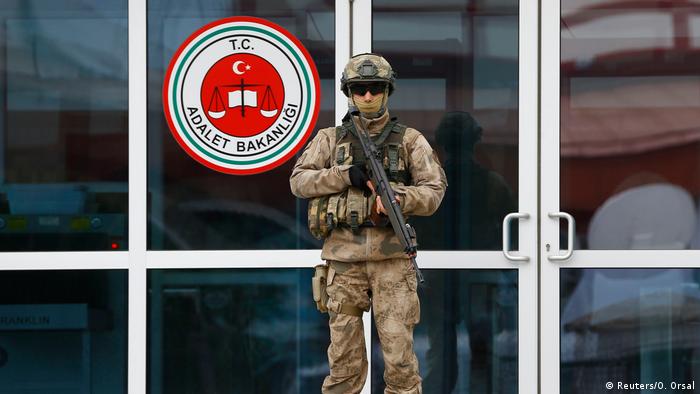 The male students are being held at Silivri prison near Istanbul, where German-Turkish journalist Deniz Yücel was detained for over a year

On March 18, Turkish President Recep Tayyip Erdogan announced that allied forces had taken "full control" of the center of formerly Kurdish-held Afrin in northern Syria. The following day, a group of students at Istanbul's renowned Bosphorus University celebrated the news, handing out "Afrin sweets" on campus. The event was staged to express support for Turkey's military campaign in Syria, a hot-button issue in Turkey's upcoming elections.

Another group of students turned out to protest against the celebrations, under a banner stating "There can be no occupation and massacre sweets." Brief clashes between both sides erupted, until police intervened and arrested 14 out of the 22 counterprotesters. They were brought to Istanbul's Bakirkoy women's prison and Silivri jail, respectively.

All 22 counterprotesters are now accused of spreading terror propaganda. Their trial begins on June 6. Relatives and fellow students are in shock.

Many fellow students have organized support groups to help their friends. Tilbe Akan, who studies western languages and literature, also attended the counterprotest and was arrested, but then released on the same day. Akan and her peers have created a number of protest banners and videos expressing solidarity with their incarcerated friends. She's convinced their arrest was politically motivated. "It is a political trial. We do not think it has anything to do with delivering justice."

On March 24, Erdogan held a speech in which he lambasted the counterprotesters: "There were some pious, national, local teenagers giving out Afrin sweets. And then these communist traitors arrived and destroyed their stand. We are investigating these teenage terrorists. We will deny them the right to study at the university."

The incarcerated students' lawyer, Doguscan Aydin Aygun, argues that their protest is not a criminal offense but an act of free speech. They expected the case to be dropped, until they were actually charged. Still, Aygun says the jailed students are doing fairly well. They spend their time reading and studying, although it is unclear if they will be able to take their university exams.

Aygun notes that being kept behind bars undermines their ability to continue their studies. There is a real danger they may not be allowed to take their exams: a decree issued in 2016 stipulates that any person convicted of or linked with crimes committed by "terrorist organizations" is prohibited from taking exams at training, educational, or public institutions, during the national state of emergency declared following a failed coup in July 2016. The state of emergency has recently been extended for the seventh time, and since the failed coup, the government has increasingly cracked down on freedom of expression and the media.

Many fellow students and university lecturers oppose the imprisonment of the young protesters. Can Candan, who teaches at Bosphorus University, says everyone on campus, ranging from university employees to graduates, is upset by these recent events. "Our students have been stigmatized as terrorists for expressing their political opinions, and for speaking out against war." He thinks it is unacceptable that they are denied their freedom and right to attend university. "We are saddened by what is happening to them." He says that the arrests have cast a pall over the university that disturbs its peaceful and free atmosphere, and that the students belong in school, not in jail. "We will work hard to uphold their right to continue their university studies and for them to enjoy their constitutionally guaranteed freedom," stresses Candan.

Read more: Remembering Gezi Park protests and the dream of a different Turkey

Esen Deniz Ustundag is studying to become a chemistry teacher and has been jailed at the Bakirkoy women's prison since April 3. She, too, is charged with spreading terror propaganda because she participated in chanting "No war, freedom now," "AKP murderers must be held accountable," and "The [presidential] palace wants war, the people want peace." Every Monday, Esen's sister Ozlem comes for a 35-minute visit and speaks with Esen, the two separated by a glass window. Ozlem says her sister is a vegan, which poses a problem in jail. "We had some issues with her diet. For lunch, she gets a boiled potato. In the evening, she gets potatoes and sauce. That has been her diet for two to three weeks now."

'We hope to get a fair trial'

What saddens Ozlem most is that her sister Esen is being labeled a terrorist. "That is unacceptable and totally absurd." That's why she is anxious for the court to get to work: "We hope to get a fair trial," she underlines.