Turkish President Erdogan has said his country's parliament will consider whether to reintroduce the death penalty. Such a move would likely put Turkey on a collision course with the European Union. 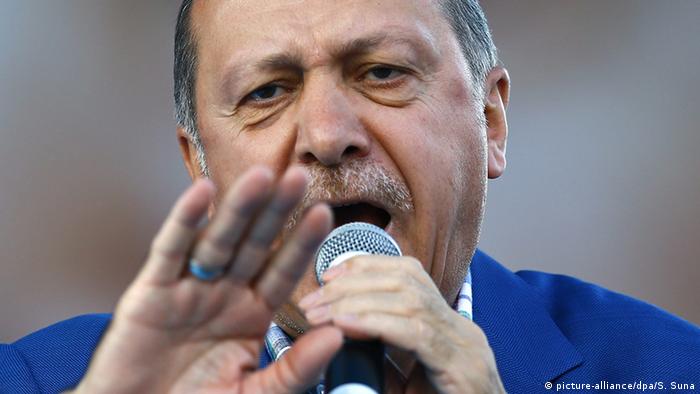 In a speech in Ankara, Turkish President Recep Tayyip Erdogan said on Saturday that he would ask parliament to consider reintroducing the death penalty.

"Our government will take this [proposal on capital punishment] to parliament," Erdogan said. "I am convinced that parliament will approve it, and when it comes back to me, I will ratify it."

If reinstated, the punishment could be used for those found guilty of organizing a July coup that sought to remove Erdogan from power. Some 35,000 people have been arrested in connection with the failed coup.

Turkey did away with capital punishment in 2004 during negotiations to join the European Union, which has outlawed capital punishment and requires members to do so as well. German Chancellor Angela Merkel and other European leaders have said reinstating the death penalty would be "in no way compatible" with membership in the EU.

The Turkish leader, however, brushed off any criticism that could come from Brussels.

Erdogan made the comments on Saturday as he attended the opening of a station for high-speed trains in the country's capital Ankara, reported Turkey's privately owned Dogan news agency.

"Soon, our government will bring (the bill) to Parliament... It's what the people say that matters, not what the West thinks," he added.

Saturday's speech, however, was not the first time Erdogan had called for capital punishment to be legalized.

However, while Erdogan's Justice and Development Party dominates the parliament, it does not have enough seats to amend the constitution. The Turkish President could get around this by putting the issue to a plebiscite. However, one legal snag would remain: whether to apply capital punishment retroactively, meaning on crimes committed before the law changes.