President Recep Tayyip Erdogan has called for a return of the death penalty as over a million Turks gathered in Istanbul for an anti-coup rally. The move, he says, would only come into force if parliament votes in favor. 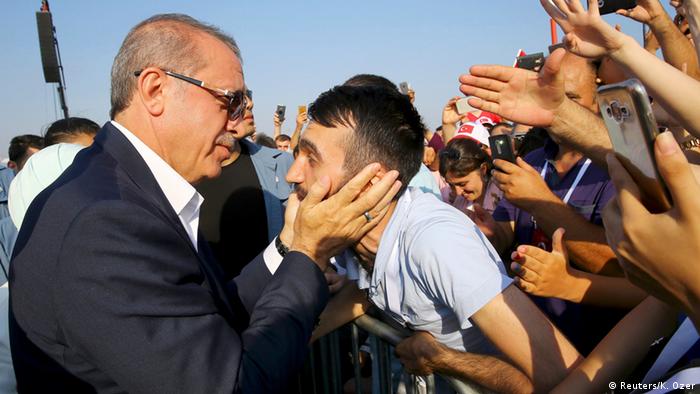 The government-sponsored "democracy vigil" is the culmination of weeks of heightened nationalism and religiosity and marks the end of nightly demonstrations since the July 15 failed military insurrection that left over 270 people dead.

Since the failed coup, the Turkish government has been encouraging nightly anti-coup rallies in all of the country's 81 provinces as well as in various foreign locations such as Cologne, Germany.

Turkish media also reported Sunday that a giant screen was to be set up in Pennsylvania, the US state that is home to Islamic cleric Fethullah Gulen, whom Erdogan has accused of being behind the coup attempt.

The rally was a cross-party event "aimed at representing Turkish unity" in the wake of the failed coup. Banners in the crowd read: "You are a gift from god, Erdogan" and "Order us to die and we will do it."

It was also the first time in decades that major opposition parties joined a rally in support of the government in the nation of almost 80 million.

"July 15 has opened the door for our reconciliation," said main opposition Republican People's Party Chairman Kemal Kilicdaroglu. "There is now a new Turkey after July 15. If we can further this power, this culture of rapprochement, we will all be able to leave our children a great Turkey," he added.

Religious leaders and two of Turkey's three opposition parties were in attendance, sitting next to Erdogan, who arrived by helicopter. The pro-Kurdish People's Democracy Party (HDP), wasn't invited.

A 60-meter (200-foot) stage was set up for the event, framed by two platforms and draped with massive national flags and banners depicting Erdogan and Turkey's founding father, Mustafa Kemal Ataturk.

The event started with a minute of silence for those killed while opposing the coup, followed by the Turkish national anthem and a recitation of prayers. A roll call of those who died opposing the coup was also read out.

About 18,000 people have been detained or arrested, mostly from the military, and tens of thousands of people have been suspended or dismissed from jobs in the judiciary, media, education, health care, military and local government.

And now to Putin

Erdogan travels to Russia on Tuesday to talk with Russian President Vladimir Putin on opening "a new page" in bilateral relations, he told the Russian news agency, TASS, in an interview published on Sunday.

"This will be a historic visit, a new beginning. At the talks with my friend Vladimir (Putin), I believe, a new page in bilateral relations will be opened. Our countries have a lot to do together," TASS quoted Erdogan as saying.

Erdogan and Putin will reportedly focus in their talks on Tuesday on the Syria conflict, trade, energy and the resumption of Russian charter flights to Turkey.

"Without Russia's participation it's impossible to find a solution to the Syrian problem. Only in partnership with Russia will we be able to settle the crisis in Syria," Erdogan said.

Russia and Turkey are on different sides in Syria, Moscow backing President Bashar al-Assad and Ankara wanting him ousted.

Ankara accuses the West of showing more concern over Turkey's post-coup crackdown than over Syria.

Turkish officials were quick to tell reporters, however, that Erdogan's visit to Russia
does not mean Turkey, a NATO ally, is turning its back on the West.