The Turkish president has called on participants to bring the national flag to show support for a "single motherland." The rally is expected to cap nightly pro-democracy demonstrations in the wake of a failed coup. 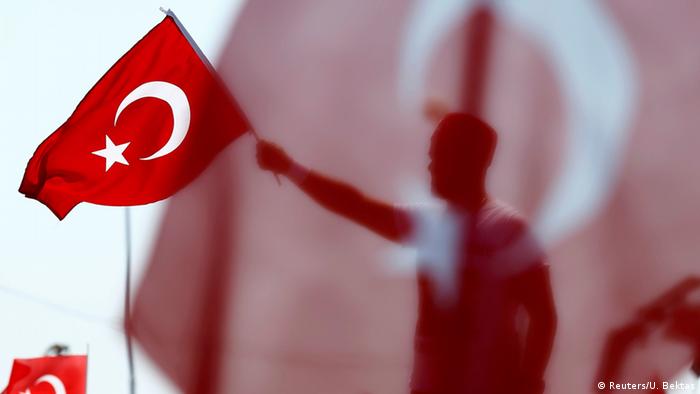 Crowds on Sunday gathered in Istanbul's Yenikapi parade ground for a massive rally that caps nightly demonstrations aimed at showing solidarity with the country's democracy in the wake of a failed coup.

The impact of the failed coup attempt that almost toppled the Turkish government in July is reshaping the landscape of Turkish politics, as Tom Stevenson reports from Istanbul.

Turkish President Recep Tayyip Erdogan, who is expected to be in attendance, urged participants of the "Democracy and Marty's Rally" to bring the Turkish flag instead of party banners.

"There we will stand together as a single nation, a single flag, a single motherland, a single state, a single spirit," he said.

Flyers were distributed overnight, offering free public transport to the event. "The triumph is democracy's, the squares are the people's," the flyer said.

Two of Turkey's three opposition parties were expected to have representatives in attendance. The pro-Kurdish People's Democracy Party (HDP) was, however, not invited.

"The only way to eliminate coups is to revive the founding values of the republic. These values that make our unity should be spoken out loud at Yenikapi," said Kilicdaroglu in a tweet ahead of the rally.

Nearly 15,000 police were deployed to secure the event, which the state-run Anadolu news agency estimates could be attended by millions.

More than 270 people were killed on July 15, when a group in the Turkish armed forces attempted to overthrow Erdogan.

The government responded to the failed coup by suspending, detaining or placing under investigation tens of thousands of people.

Erdogan has come under increased criticism following a mass purge that witnessed some 60,000 government workers suspended or fired in the wake of the failed coup, while thousands of military personnel and dozens of journalists have been detained.

Germany's Die Linke (The Left) party Chairman Bern Riexinger on Sunday told the Funke media group that Ankara had no place in the European Union, accusing Erdogan of orchestrating the coup to consolidate power.

"A government that hunts journalists, redefines justice, throws opposition into prisons and wages war against its own people cannot be included in the EU," said Riexinger.

"We are experiencing a coup d'etat from above like in 1933 after the Reichstag fire. He is building an authoritarian regime tailored solely to himself," Lindner said, referring to the event cited by scholars as a pivotal moment for Adolf Hitler's consolidation of power.

"Because the rights and freedoms of the individual no longer play a role, he cannot be a partner for Europe," he added.

The US State Department in July said it was "deeply concerned" by the mass arrests, especially of journalists and activists.

"We would see this … as a troubling trend in Turkey where official bodies, law enforcement and judicial, are being used to discourage legitimate political discourse," said State Department spokesman John Kirby.