Thousands of people have gathered across Turkey to lay a group of the Ankara bombing victims to rest and express their anger at the government. Ambassadors of EU countries laid flowers at the site of the deadly attacks. 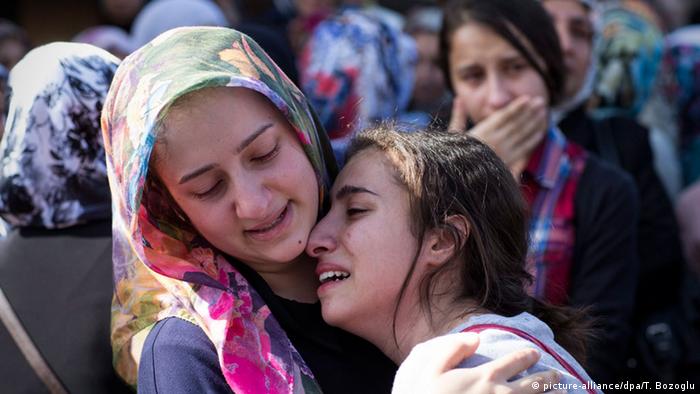 Mourners took to the streets of Istanbul, Ankara and other Turkish cities on Monday, two days after the attack at an Ankara peace rally claimed at least 97 lives.

Hundreds of people marched towards a mosque in Istanbul's suburb of Umraniye to attend the funeral of several victims, with protesters chanting slogans against the government and President Recep Tayyip Erdogan, including "Thief, Murderer Erdogan."

While the officials claim that the "Islamic State" is most likely behind the attacks, many leftist and pro-Kurdish groups place the blame on the government for failing to protect the rally.

Pro-Kurdish Peoples' Democratic Party (HDP), one of the rally's organizers, called the blasts an "attack by the state against the people."

Two HDP candidates for the upcoming November 1 election were killed in the bombings. The party leader Selahattin Demirtas attended several funeral services in Istanbul on Monday, where many of the coffins were draped in colors of the Kurdish flag.

Some 2,000 people attended the funeral ceremony of Fatma Esen, 38-year old mother of two in Istanbul's Gazi district, according to the AFP news agency.

Hundreds of people also marched in Ankara, many of them wearing doctor's uniforms and carrying Turkish Medical Association banners. They attempted to lay flowers at the site of the attacks, but were blocked by riot police, according to a Reuters witness.

A similar protest was held at the Ankara university campus on Monday, and several labor unions also urged their members to come out to the streets.

Also on Monday, ambassadors of EU countries jointly paid their respects at the site of the attacks outside of Ankara's main train station.

Kurtulmus added that authorities have detained "a large number" of suspects, but refused to give an exact figure and comment of the any terror groups they might be affiliated with.

Earlier, Turkish authorities said they were close to identifying one of the bombers.