The families of the forcibly disappeared in Turkey have gathered for a symbolic 600th time demanding justice. The Saturday Mothers movement is one of the longest running civil disobedience campaigns in the country. 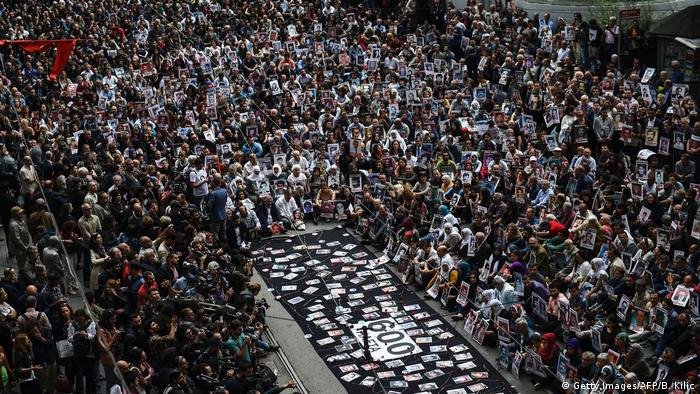 Holding red carnations and pictures of loved ones forceably disappeared by Turkish security forces over the years, the Saturday Mothers (Cumartesi Anneleri) and thousands of supporters sat on Istanbul's main pedestrian thouroughfare for the 600th time on Saturday in one of the longest running acts of civil disobidenced in the country.

The families of the forcibly disappeared and human rights activists gather in Istanbul's Galatasaray Square every Saturday at noon to demand justice and accountability for thousands of people, mostly Kurds, disappeared by security forces and the police in the wake of the 1980 military coup and the so-called "dirty war" between the state and Kurdish separatists in the 1990s.

Taking inspiration from the Argentinean movement Mothers of Plaza de Mayo, which organized in the late 1970s to find out the fate of people disappeared during that country's dictatorship, the Saturday Mothers have gathered since 1995 under the motto "We want our disappeared loved ones."

The protests for justice is against the "entrenched official mentality that has utilized enforced disappearance to eliminate the opposition and instill a culture of fear in society," according the Turkish Human Rights Organization.

Speaking at the sit-down, Elmas Eren, whose son Hayrettin disappeared 36 years ago, said, "My soul has been troubled looking for his bones. What was the crime of our bright children that we never heard from them again, that the state killed them."

The sit-down was supported by other protests across Turkey and in Europe, including solidarity sit-downs in Hamburg and Berlin.

The Saturday Mothers' main demand is that the bodies of those disappeared be found, the perpetrators tried and justice delivered. Their demands also include a change in the statute of limitations in order to prosecute political murders and forced disappearances.

The 600th sit-down comes as concern mounts that the state may be resorting to forced disappearances again after a multi-year break. A young Kurdish politician, Hursit Kulter, disappeared in Sirnak in May during a security clampdown on Kurdish militants. He is the first person to be disappeared in 15 years in Sirnak, where during the 1990s at least 200 people were never heard from again after being taken into custody by security forces.

Award-winning journalist Günter Wallraff calls attention to plight of writers and journalists in Turkey. He tells DW what can be done to help persecuted intellectuals and which mistakes the West has made with Turkey. (19.09.2016)

Tom Stevenson reports from Diyarbakir in southeastern Turkey, where a city and its residents are suffering from the aftermath of a brutal conflict and an overbearing police presence. (16.09.2016)