Turkey's president has likened several Arab states' efforts to isolate Qatar to imposing the death penalty. Qatar is one of Ankara's main regional allies and is seeking a diplomatic route out of the Gulf crisis. 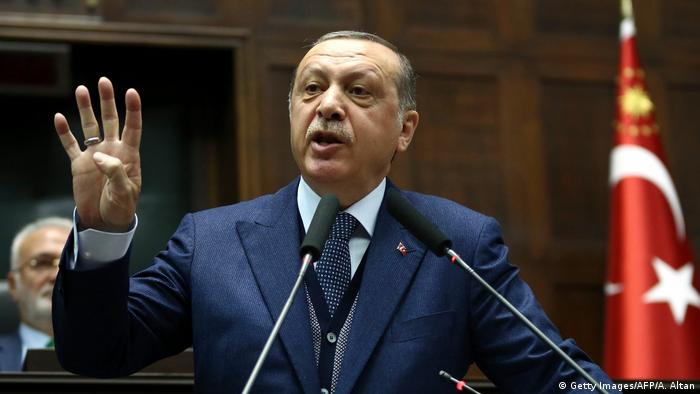 Erdogan speaks to party members as he flashes the four finger "Rabia" sign used by supporters of the Muslim Brotherhood in Egypt. He has said the sign stands for "one nation, one flag, one people, one state" in Turkey.

"It is neither humane nor Islamic to totally isolate a country's people," Erdogan told a gathering of lawmakers from his ruling Justice and Development Party in Ankara.

Saudi Arabia, the United Arab Emirates, Bahrain and Egypt cut diplomatic ties with Qatar last week, accusing it of supporting "terrorism," destabilizing the region and having close ties with Iran.

An embargo has also cut off food, transport and other links between the four countries and Qatar, which typically imports around 80 percent of its food from its neighbors.

Qatar denies allegations it supports terrorism and has vowed to not give up its independent foreign policy.

Erdogan dubbed the Saudi-led actions as tantamount to a "death penalty" imposed on Qatar, which he said was the target of a defamation campaign.

Read: Why Turkey is standing behind Qatar in the Gulf crisis

The crisis has put Turkey in a difficult position as it views Qatar as one of its chief allies in the region, but Ankara also seeks to avoid damaging relations with Saudi Arabia and other Arab states.

Erdogan called on Saudi Arabia's king as the leader of the region to resolve the impasse.

"Resolving this crisis as soon as possible is in the interest of all nations and people," Erdogan said.

Underpinning Turkey's stance on Qatar are strong investment ties, cooperation in Syria's civil war and the sharing of similar views on political Islam, most notably on Hamas and the Muslim Brotherhood, which the Gulf monarchies and Egypt oppose.

Turkey has been a sharp critic of Egyptian President Abdel-Fattah el-Sissi's crackdown on the Muslim Brotherhood since the former general (now retired from the military and elected to his office) ousted Islamist President Mohammed Morsi in a 2013 coup.

Qatar and Turkey also seek to engage Saudi Arabia's rival Iran despite differences with Tehran's policies in the broader region.

Erdogan said Qatar had fostered stability and was a key actor in fighting the "Islamic State" (IS).

"Without the support of Turkey and Qatar it would not be possible for Syria to push back Daesh (IS)," Erdogan said, referring to Ankara and Doha's backing of some of the same Syrian rebel groups.

Qatar is home to the forward headquarters of US Central Command, which leads US military action against IS in Iraq and Syria.

Seeking to show its backing of Doha, Turkey has fast-tracked a previously planned deployment of soldiers and trainers to Qatar and has begun delivering food and other supplies by air.

Separately, Erdogan sharply criticized US support for the YPG Kurdish militia fighting IS in Syria. Ankara views the YPG as a terrorist organization, because of its links to Kurdish militants fighting in Turkey.

A group of Arab countries that cut ties with Qatar earlier this week has produced a list of people it claims are linked to terrorism. Qatar has vowed it would not "surrender" to the mounting pressure. (09.06.2017)

Gulf states have escalated their dispute with Qatar by accusing members of the royal family of sponsoring terrorism. Germany's top diplomat Sigmar Gabriel has warned that "dramatic" tensions could lead to a war. (10.06.2017)