Ankara has said Syrian military airstrikes on rebel-held areas in Wadi Barada could jeopardize planned peace talks in Kazakhstan. Damascus has accused the rebels of deliberately cutting off the capital's water supply. 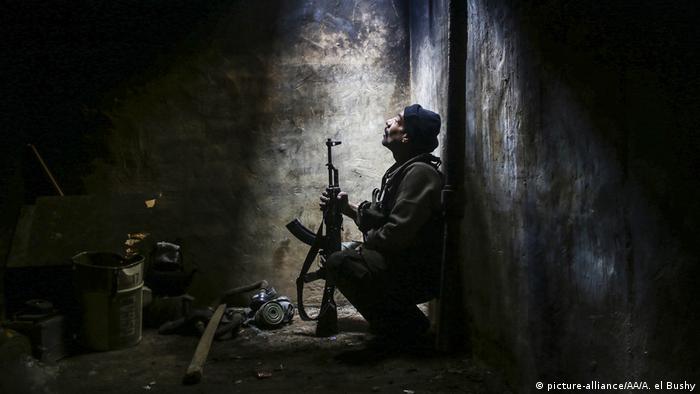 Turkey has accused the Syrian regime of violating a truce deal it brokered with Russia last week, warning that it could jeopardize a new round of peace talks scheduled for later this month.

While a nationwide ceasefire, in force since Friday, has brought quiet to much of Syria, fighting continued on Wednesday near the Syrian capital, Damascus. Syrian President Bashar al-Assad's forces, backed by Lebanese Shiite movement Hezbollah, mounted at least 15 air and shelling strikes on rebel-held areas in Wadi Barada, northwest of Damascus. It remains unclear whether there were any casualties.

Erdogan accuses US of backing IS

The Turkish President's comments have come amid the military's fierce offensive against Islamist jihadists in the fight for the Syrian town of Al-Bab. The US State Department has rejected the accusations as "ludicrous." (28.12.2016)

Turkish Foreign Minister Mevlut Cavusoglu urged the Assad regime and its backers to end their "violations" of what has proven to be a very "fragile" truce agreement.

Cavusoglu warned that any further violations would risk jeopardizing the upcoming peace talks in the Kazakh capital, Astana, scheduled to begin on January 23.

"If we do not stop the increasing violations, the Astana process could fail," Cavusoglu told the state-run Anadolu news agency on Wednesday. "After the ceasefire, we see violations."

"When we look at who commits these violations, it is Hezbollah, in particular Shiite groups and the regime," he added.

Cavusoglu urged Russia and Iran, Assad's key allies in the Syrian civil war who are also preparing for the Astana talks, to pressure the Syrian president to stop fighting.

The "fragile" ceasefire deal between the Syrian government and main opposition groups went into effect on Friday.

The deal is a potential major breakthrough after nearly six years of civil war.

Wadi Barada, a rebel-held area just outside Damascus which holds the capital's water supplies, has been under government siege since 2015. The Assad regime's military efforts were upped in recent days after the government accused rebels of deliberately targeting the water supply, leaving some 4 million people without water for the last four days.

Rebels, meanwhile, have denied responsibility, asserting that infrastructure for supplying water was damaged in government strikes.

Rami Abdurrahman, director of the UK-based Syrian Observatory for Human Rights monitor, said "local officials want... Russian teams to enter to fix the infrastructure" in exchange for a break in the fighting.

"But the regime wants control of the spring and the pumps to prevent any blackmail or threats in the future," Abdurrahman told AFP. "This is their condition for halting military operations."

Fight against IS continues

The Syrian peace deal excludes the insurgency against the so-called "Islamic State" (IS) jihadi group and the formerly al-Qaeda-linked Fatah al-Sham Front.

On Wednesday, the US confirmed that two airstrikes killed over 30 jihadis in northwestern Syria, namely from Fatah al-Sham, formerly known as the Nusra Front.

The US-led coalition confirmed Wednesday that it was prepared to support Turkish forces in its fight against jihadi forces. "I can confirm for you that those discussions have been happening and the Turks are aware of some of the things that might be in store," Colonel John Dorrian said.

The United States and Turkey have clashed over US support of the Kurdish Peoples' Protection Units (YPG) and Democratic Union Party (PYD) on the ground in Syria, groups Ankara recognizes as terror organizations.

Last month, Turkish President Recep Tayyip Erdogan accused the US of backing IS, accusations the US State Department dismissed as "ludicrous."