Two domestic electric car prototypes were unveiled with production expected to begin in 2022. The government-supported venture is set to cost more than €3 billion, with plans to produce five models in 15 years. "Today we are witnessing a historical day for our country, witnessing Turkey's dream for 60 years come true," Erdogan said at a ceremony at a technology hub in the industrial Gebze district near Istanbul.

Turkey has a large auto manufacturing sector with international players Ford, Fiat Chrysler, Renault, Toyota and Hyundai all operating in the country. But at these facilities, Turkish workers are assembling cars and parts designed and conceived far away, often exporting the finished models to Europe.

"We have been saying for years that Turkey needs to produce its own car, that we deserve better than being assemblers," Erdogan said. "Turkey has become a country which is not only a market for new technologies but also a country which develops, produces and exports them to the world."

He later posted a video on Twitter of him test driving one of the cars, saying he would reserve one for himself.

Two models were unveiled on Friday, an electric light SUV and sedan. 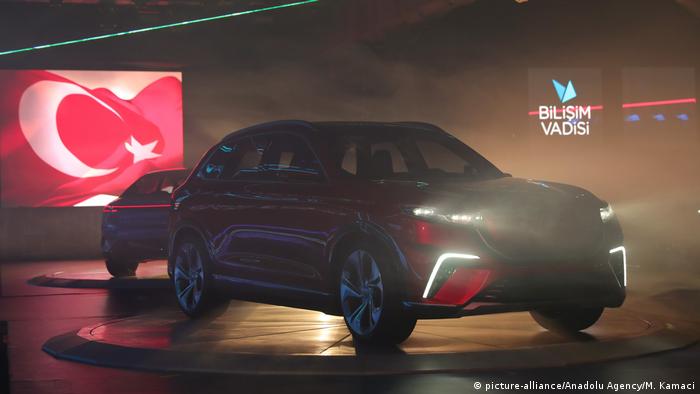 A planned factory in Bursa, Turkey's fourth largest city, south of Istanbul, is expected to produce up to 175,000 of the SUV and sedan units per year by 2022, just a year before national elections and the hundredth anniversary of the Turkish Republic.

The government will provide land for the production facility, tax exemptions and a purchase guarantee of 30,000 cars per year until the end of 2035, according to the official decree.

Drive it! - The DW Motor Magazine

Turkey poised to send troops to Libya, ratcheting up tensions in E. Mediterranean

Turkey is preparing to send troops and advanced weapons to the embattled UN-backed Libyan government. The military muscle flexing puts it at odds with Russia and several Arab states backing Libya's rival government. (26.12.2019)

Turkey has outraged some of its partners with its military operation in Syria and human rights violations at home. How does the country's presidential spokesperson justify those policies? He talks to DW's Tim Sebastian. (27.11.2019)