Turkish forces have ousted the Kurdish YPG militia from the Syrian enclave of Afrin, a week after they captured the main town that bears the same name. The military is now sweeping for mines to allow residents to return. 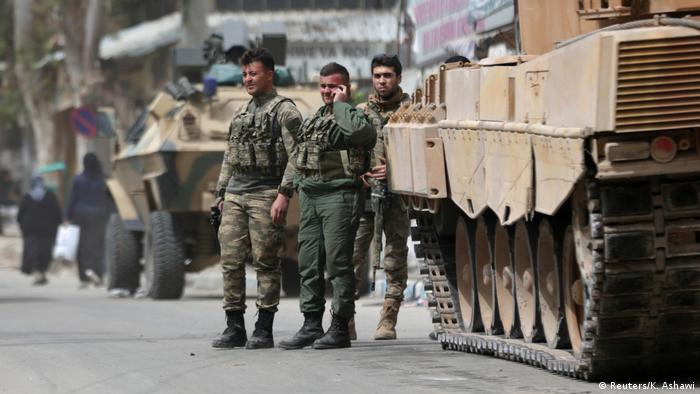 The Turkish military and its Syrian rebel allies have taken "complete control" of the Syrian enclave of Afrin in northern Syria, Turkish state media reported on Saturday.

Last Sunday, Turkish-backed forces seized the main town that is also called Afrin without much resistance from the Syrian Kurdish militia known as the People's Protection Units, or YPG.

Anadolu news agency said the Turkish military was now sweeping for mines and explosives to allow Afrin's resident's to return.

Turkey launched a ground and air offensive in January against the YPG that controlled Afrin. Turkey considers the YPG a terror group and an extension of the banned Kurdistan Workers' Party (PKK) rebels, which is waging an insurgency within its own borders. Cooperating with YPG, however, forms an integral part of the US-led fight against "Islamic State."

The offensive has displaced more than 200,000 people from their homes, according to Syrian Kurdish officials and the country's state media, prompting the EU and United States to issue statements of "concern" over the humanitarian situation.

Turkey says it will expand its offensive against the YPG further east of Afrin and even into northern Iraq, a region that Ankara describes as a "terror corridor."

After Angela Merkel broke her silence on Turkey's Afrin offensive and condemned the attack, Ankara rejected her stance as "unacceptable." Merkel also decried the assault on Ghouta ahead of reports of evacuations. (22.03.2018)