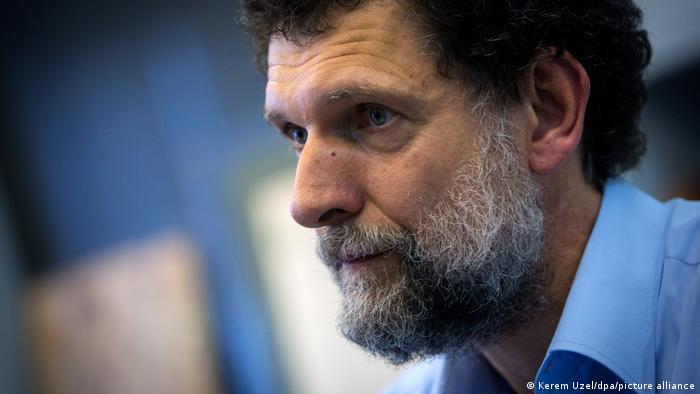 Kavala, 64, had been held without a conviction since October 2017

Turkish activist and philanthropist Osman Kavala was found guilty of trying to overthrow the government by an Istanbul court on Monday.

He had spent the last four and a half years in prison without being convicted.

The trial had garnered international attention, adding pressure to ties between Ankara and its Western allies as the process had been widely viewed as a crackdown on critics of Turkish President Recep Tayyip Erdogan.

DW correspondent Dorian Jones said the response to the verdict and sentence had been one of shock. "There is a palpable shock within Turkish civic society. The severity of the sentence is the most severe that can be given to anyone in Turkey. It means that Osman Kavala will be held in solitary confinement, he will be ineligible for parole, and he now spends the rest of his life in jail."

AFP news agency reported that the ruling drew boos from some of those who had gathered to witness proceedings, among them a number of Western diplomats.

According to the Media and Law Studies Association group, which had been monitoring the trial, following his sentencing, Kavala said: "The aggravated life sentence demanded against me is an assassination that cannot be explained through legal reasons."

Emma Sinclair-Webb of Human Rights Watch said Kavala's conviction and sentence was "the worst possible outcome to this show trial".

Kavala and seven other prominent defendants faced accusations of espionage and attempting to overthrow the government, among other charges.

They were accused of ties to the 2013 Gezi protests and the 2016 coup attempt, both considered by Erdogan as part of an international plot to topple him.

Defendant Mucella Yapici previously told the court that the 2013 Gezi rallies were the "most democratic, most creative and peaceful collective movement in this country's history."

Paris-born Kavala, who made his fortune in publishing, was initially detained on arrival at Istanbul's airport from a trip to a cultural center in the Turkish city of Gaziantep in October 2017.

He was accused of financing a wave of 2013 anti-government protests. Despite being cleared in 2020, he was arrested again just hours later on a charge of attempting to overthrow the constitutional order related to a 2016 coup attempt.

He was also acquitted on that charge — but detained on accusations of espionage in the same case. Critics say those charges were aimed at circumventing a 2019 ruling by the European Court of Human Rights (ECHR) calling for his release.

Ultimately, the 64-year-old faced charges relating to both the 2013 protests and the 2016 coup effort.

Turkey declared a state of emergency after the failed coup attempt, and used that as a pretext to purge its military and public sector ranks.

Foreign Minister Annalena Baerbock said the court's decision was "blatantly in contradiction with the norms of the rule of law and international obligations Turkey has signed up to as a member of the Council of Europe and EU membership candidate."

"We expect Osman Kavala to be freed immediately," Baerbock said, adding that the European Court of Human Rights had asked Turkey to do so.

The US Department of State said it was "deeply troubled and disappointed" by the judgment.

"His unjust conviction is inconsistent with respect for human rights, fundamental freedoms, and the rule of law. We again call on Turkey to release Osman Kavala," said a State Department statement on Monday.

"We remain gravely concerned by the continued judicial harassment of civil society, media, political and business leaders in Turkey," it added.