Osman Kavala case: Council of Europe launches proceedings against Turkey | Europe | News and current affairs from around the continent | DW | 03.02.2022

The Council of Europe's Committee of Ministers has taken a further step to launching sanctions against Turkey for not releasing philanthropist Osman Kavala. It has asked the ECHR to reexamine the case. 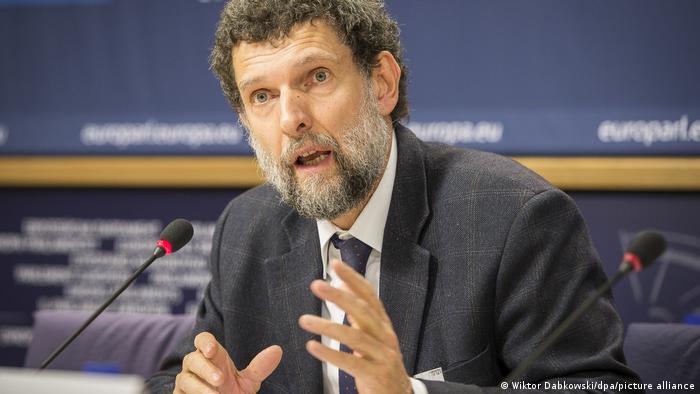 In December 2019, the European Court of Human Rights (ECHR) ordered the immediate release of Osman Kavala, a leading figure in Turkish civil society. But that fell on deaf ears. The ECHR had ruled that Kavala's rights were violated by the Turkish state. Osman Kavala has been jailed for over four years without a conviction and remains in Istanbul's Silivri Prison.

"I hope that the evaluation of the European Court of Human Rights will contribute to the protection of legal norms regarding human rights in our country," Kavala said in a statement after the latest development.

"It is regrettable that the Turkish authorities have refused to execute the respective ECHR's ruling. Such an attitude sets a worrying precedent and further increases the EU's concerns regarding Turkish judiciary's adherence to international and European standards," said Peter Stano, EU spokesperson for foreign affairs and security policy.

"It is evident that this prejudiced and politically motivated decision, which disregards the domestic proceedings, damages the credibility of the European human rights system," the ministry said in an official statement.

In the wake of the Council's latest move, human rights organizations have stepped up their criticism of Turkey's stance. "The vote makes clear that by pursuing further farcical charges without any evidence against Osman Kavala, Turkey's judicial system is simply trying to keep him behind bars come what may and that the Council of Europe, of which Turkey is a founding member, will not stand by idly and watch," Amnesty International's Europe Director Nils Muiznieks said.

According to Human Rights Watch (HRW), infringement proceedings against Turkey are an important step to support the protection of human rights in Turkey.

Kavala's detention is a disgrace to the Turkish judiciary

In February 2020, Osman Kavala was acquitted in the Gezi trial, related to the nationwide protests in 2013. However, he was re-arrested for his alleged involvement in the attempted coup in 2016 and detained on espionage charges. According to Kavala's attorneys, the charge was fabricated based on the same investigation file and the same evidence used in the Gezi trial proceedings.

In a written statement after the Council of Europe's decision, Kavala's attorneys said that prolonging the detention as a punishment was an unlawful exercise of public authority and that his detention was a disgrace to the Turkish judiciary.

"The content and form of the judicial practices after the decision of acquittal issued in the Gezi trial do not only constitute a failure to execute the judgment of the ECHR, but also represent a series of violations that could not be ignored even if this judgment had not been issued," they said.

'Kavala case is a demonstration of democratic backsliding'

The Kavala case is likely to have a further impact on Turkey's already tenuous relations with the European Union. In a next step, the Committee of Ministers may take additional measures against Turkey such as suspending its voting rights in the Council of Europe.

Ilke Toygür, a political scientist at the Center for Applied Turkey Studies of the German Institute for International and Security Affairs, says that Kavala's case plays an important role in EU-Turkey relations.

"For the EU, his case is a solid demonstration of Turkey's democratic backsliding. I heard many times from European decision-makers that as long as he remains behind the bars, the relations will not significantly improve," Toygür told DW.

The analyst also expects the European Parliament to be very vocal on the issue. "They are preparing their annual report on Turkey and it will soon be debated in the Foreign Affairs Committee," she said.

Toygür believes Turkey's refusal to implement the ECHR's ruling is a stark demonstration of the way the country violates its international commitments. "If Turkey is committed to its candidacy process — as Turkish officials claim — the first steps to take are related to democracy, rule of law and basic rights," she said.

The move to declare the 10 envoys — including those of Germany and the United States — "persona non grata" means they are now just one step from expulsion after calling for the release of activist Osman Kavala.