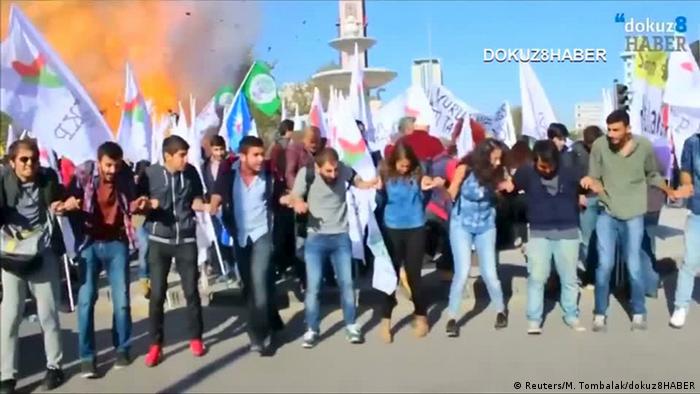 Health Minister Mehmet Muezzinoglu told a news conference on Saturday afternoon that 86 people had been killed and 186 wounded, with the death toll likely to rise.

The explosions happened seconds apart soon after 10 a.m. local time (0700 UTC) as hundreds gathered for a march to protest the conflict between Turkish security forces and Kurdish militants in the southeast.

Turkish President Recep Tayyip Erdogan condemned the "heinous act" and made an appeal for unity.

"The greatest and most meaningful response to this attack is the solidarity and determination we will show against it," he said.

The attack, near Ankara's main train station, comes in the run-up to a snap election on November 1, which is set to go ahead despite mounting security issues.

Chancellor Angela Merkel expressed sympathy over the bombings, saying they appeared to be "cowardly acts which are directly aimed at civil rights, democracy and peace."

EU foreign policy chief Federica Mogherini urged the country to stand "united against terrorists," while the White House sent condolences to the victims and their families.

"The fact that this attack occurred ahead of a planned rally for peace underscores the depravity of those behind it and serves as another reminder of the need to confront shared security challenges in the region," National Security Council spokesman Ned Price said in a statement. 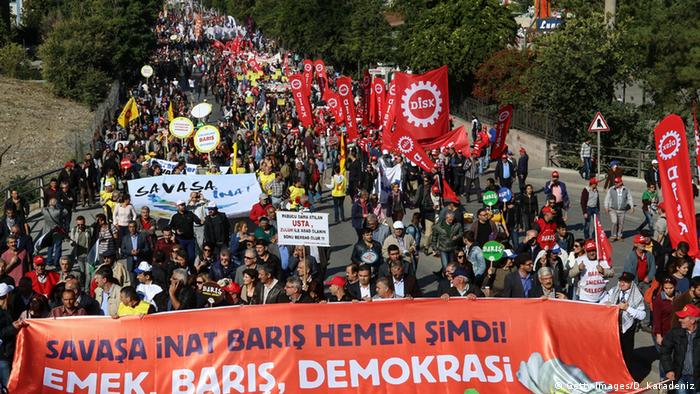 Hundreds gathered for the rally in Ankara ahead of the attack

Meanwhile, the pro-Kurdish Peoples' Democratic Party (HDP) - among several groups that were to have taken part in the rally for peace - laid the blame at the door of Erdogan's own government.

"This is an attack by the state against the people," said HDP leader Selahattin Demirtas, blaming a "mafia state" which he claimed was acting "like a serial killer." The party accused police of not securing the rally, and claimed officers attacked demonstrators with tear gas when they tried to help the wounded.

A crowd booed and threw bottles as health and interior ministers arrived in a convoy at the scene. The senior politicians were quickly driven away. Activists at the scene chanted "Murderer Erdogan" and "the murderer AKP will give account."

Since the summer, rebels with the militant Kurdistan Workers' Party (PKK) have staged almost daily attacks against members of Turkey's security forces. A suicide attack in the mainly Kurdish town of Suruc in July, which targeted pro-HDP activists, was blamed on "Islamic State" (IS). It killed 32 people and wounded a hundred others.

The militant PKK claimed Ankara had collaborated with IS and resumed attacks on the Turkish security forces after observing a two-year ceasefire, bringing about the end of an already fragile peace process.

More than 140 members of the security forces have since been killed, while the Turkish government claims its forces have killed 1,700 Kurdish militants in weeks of bombardments of PKK targets.

The PKK on Saturday declared a "state of inactivity" after months of attacks, citing the upcoming election as the reason.