Turkey, Egypt and Sudan have joined the Saudi-led armed offensive against Yemen's Houthi rebels in Aden. Meanwhile, US Secretary of State John Kerry has spoken to Gulf ministers to discuss the crisis. 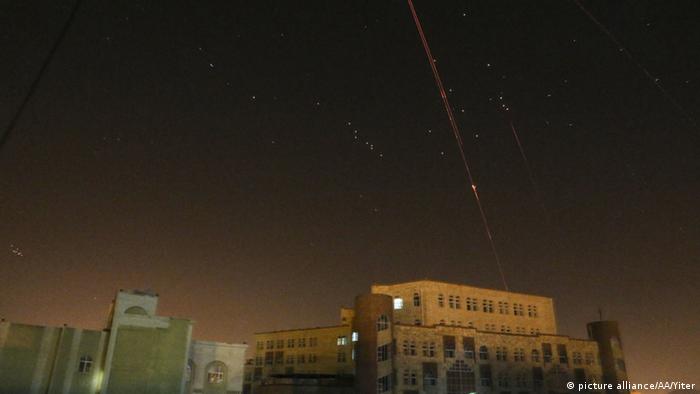 Turkey offered its support to Saudi Arabia's military offensive against Houthi rebels in Yemen on Thursday, calling on the militia group and its "foreign supporters" to stop acting in ways that disturbed security and peace in the region.

Ankara's foreign ministry said in a statement that Saudi Arabia had informed it of its plans and that the idea was to revive legitimate authority and prevent civil war, news agency Reuters reported.

Saudi warplanes continued to bomb the Houthis on Thursday as part of their offensive "Storm of Resolve" to weaken the Shiite rebels fighting against President Abed Rabbo Mansour Hadi.

Four naval vessels were additionally being sent from Egypt and were expected to reach the Red Sea by Thursday evening to secure the Gulf of Aden after Hadi's supporters regained control of its airport from the rebels, who had occupied it on Wednesday.

Meanwhile, US Secretary of State John Kerry held a conference call with Gulf ministers to discuss the crisis.

Kerry "commended the work of the coalition taking military action against the Houthis" and ensured Washington's support in "intelligence sharing, targeting assistance and advisory and logistical support for strikes against the Houthis."

Morocco, Jordan, Sudan and the Gulf states have also promised their forces to Saudi Arabia's strikes against the Shiite rebels, who have gained control of a large part of Yemen's north and driven President Hadi away from the capital, Sanaa.

Former President Saleh, who resigned in 2012 after protests, has been accused of backing the rebels.