Saudi Arabia has launched a military operation in Yemen, according to Riyadh's ambassador to Washington. Five Gulf states have said they are committed to protect Yemen from a Shiite Houthi takoever. 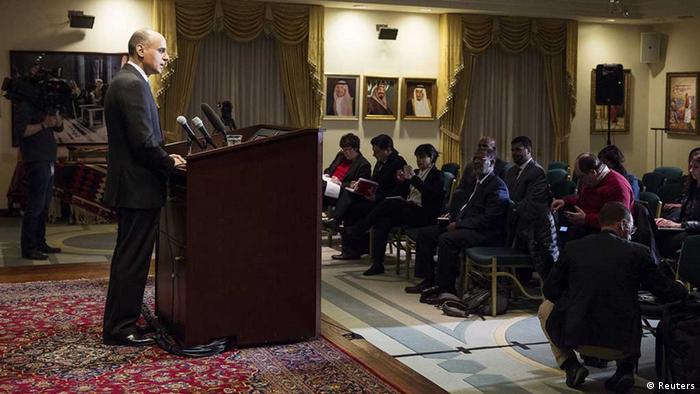 Saudi Arabia embarked on a military mission against Houthi rebels who have taken over large swathes of neighboring Yemen, the kingdom's ambassador to the US said on Wednesday.

"The operation is to defend and support the legitimate government of Yemen and prevent the radical Houthi movement from taking over the country," Adel al-Jubeir told reporters in Washington.

The envoy said the operation had started at 2 a.m. local time (2300 UTC). The military action was announced as reports surfaced that President Abed Rabbo Mansour Haddi had fled his Aden palace and left the country by boat, although his aides denied the claim.

The Reuters news agency, quoting residents and a local official, reported early on Thursday that warplanes had launched an attack on the airport of the Yemeni capital Sanaa early.

'Coalition of states, including Gulf'

There was no immediate word on where the aircraft had come from. However, the attack appeared to coincide with the Saudi announcement of a launch of operations.

Ambassador al-Jubeir said several other Gulf states had pledged military support in the fight against the Houthi rebels, following a request from Hadi to his neighbors.

That claim came at the same time as a joint statement to the same end from five countries - Saudi Arabia, Bahrain, Kuwait, Qatar and the UAE.

The statement said the countries had "decided to answer the call of President Hadi to protect Yemen and his people from the aggression of the Shiite militia."

'High level' consultations with US

Al-Jubeir said the US was not taking part in the ongoing operation itself, although a US official said Washington was providing support. Saudi consultations with the US were said to have taken place "at a high level" before the operation was launched, a Washington official told the Reuters news agency.

Egypt has said it is providing "military and political support" for the mission.

Yemen has become increasingly divided between a north dominated by Houthis and a south largely controlled by Hadi supports.

Former President Ali Abdullah Selah, who resigned in 2012 after protests, has been accused of backing the Houthi rebels in an effort to regain influence.

Yemen's leader has used a televised speech to declare a new 'temporary capital.' The president, who fled house arrest last month, also called on the Huthi rebels to abandon control of government ministries in Sanaa. (21.03.2015)