Yemen's leader has used a televised speech to declare a new 'temporary capital.' The president, who fled house arrest last month, also called on the Huthi rebels to abandon control of government ministries in Sanaa. 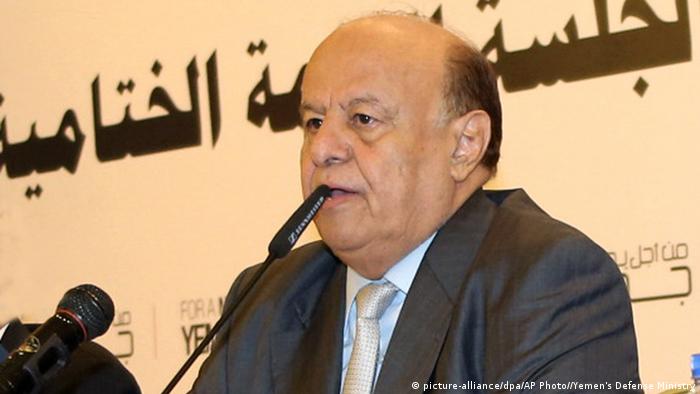 In a televised speech on Saturday, Yemen's President Raboo Mansour Hadi pledged to fight Iran's influence on his violence-ridden country.

Hadi, who was under rebel imposed house arrest until last month when he fled to Aden in the south of the country, accused Shiite Huthi militia of importing Tehran's ideology into Yemen.

In the broadcast, Hadi said he would "ensure the Yemeni republic flag will fly on the Marran Mountain instead of the Iranian flag."

In September, the Houthis overtook Yemen's capital, Sanaa, inluding Marran Mountain, seizing many state institutions. Since then they have also taken over nine of the country's 21 provinces.

"My move to Aden was not a step towards separation," despite claims to this effect from the "coup plotters," Hadi said in the address broadcast on official Aden TV. "My aim is to safeguard the legitimate state institutions."

"Aden is an economic and temporary capital," he added.

Hadi's televised address comes one day after suicide bombers killed more than 130 people in twin-attacks on mosques in Sanaa.

The bombers blew themselves up during noon prayers at the Badr and Al-Hashahush mosques, situated on opposite sides of the city, witnesses and officials said Friday. The self-styled "Islamic State" claimed responsibility for the attack.

The mosques are frequented by Shiite Houthi rebels, allied with former President Ali Abdullah Saleh, who have control of the capital.

Meanwhile, US broadcaster CNN reported Saturday that Washington was evacuating 100 Special Forces troops from Yemen because of the unstable political situation in the country. This came after al Qaeda fighters reportedly seized the southern city of al-Houta, not far from the Al Anad air base where the US troops are stationed. Howerver, Reuters on Saturday reported, citing local officials and residents, that al Qaeda in the Arabian Peninsula (AQAP) had been driven back out of the southern city on Saturday.

Al-Houta is only around 30 kilometers (roughly 20 miles) from the "temporary capital" of Aden declared as President Hadi's interim headquarters.

The foreign ministers of the Arab League will be meeting on Monday in Cairo to go over ways to help Yemen avert political chaos. The conflict on the Arab Peninsula has reached international dimensions. (09.03.2015)