Turkey denies use of chemical weapons in Syria

Turkey says it has "never used chemical weapons" after claims it used a toxic gas during an offensive in Afrin, Syria. Local doctors had been quoted as saying they treated people for exposure to chemical gases. 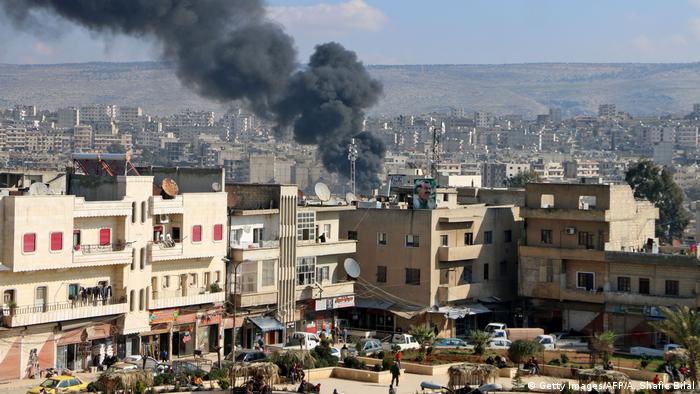 Turkey on Saturday denied allegations that it had used poisonous gas during operations in the northwestern Afrin region of Syria, following accusations from a human rights group and local news outlets.

Responding to claims that six men were treated for symptoms in line with exposure to toxic gas after a shelling offensive on Friday, a Turkish diplomatic source said Turkey had "never used" chemical weapons in Syria and accusations that it had done so during its offensive against the Kurdish People's Protection Units (YPG) militia were "baseless."

The White House said it was "extremely unlikely" the Turkish military used chemical weapons against the Kurds.

Turkey claims the YPG is linked to the outlawed Kurdistan Workers' Party (PKK), which has been fighting a rebellion against the Turkish state since 1984.

Reports of chemical gas use

Turkey launched an air and ground offensive dubbed "Olive Branch" in January on the Afrin region, opening a new front in the multi-sided Syrian war, to target Kurdish fighters in northern Syria.

The Britain-based Syrian Observatory for Human Rights (SOHR) on Friday reported that six civilians had breathing difficulties and other symptoms after a suspected poisonous gas attack.

Syrian Kurdish news outlets and state-run news agency SANA also reported the alleged attack on the village of Sheikh Hadid in the Kurdish-controlled enclave of Afrin in the country's northwest.

SOHR and the news outlets quoted local doctors in Afrin as saying the victims experienced shortness of breath, vomiting and skin rashes.

French President Emmanuel Macron on Tuesday said that "France will strike" if chemical weapons were used against civilians in Syria, but that he was yet to see proof of their use.

In May 2017, Macron said he had set a "red line" at the use of chemical weapons.

A call from the United Nations for a nationwide humanitarian ceasefire in Syria has largely been ignored.

Being a child in Syria, Afghanistan or Somalia means living in one of the most dangerous countries in the world for kids, Save the Children has reported. Attacks on children in schools and hospitals are becoming normal. (15.02.2018)

Several civilians were being treated for "suffocation" after airstrikes in rebel-held areas in northern Syria. The Syrian government denied US accusations last week it had used chemical weapons on opposition forces. (05.02.2018)