Turkey has blocked a high-level German delegation from visiting troops at an airbase taking part in the US-led mission against "Islamic State." The spat appears to be over Germany's Armenia genocide resolution. 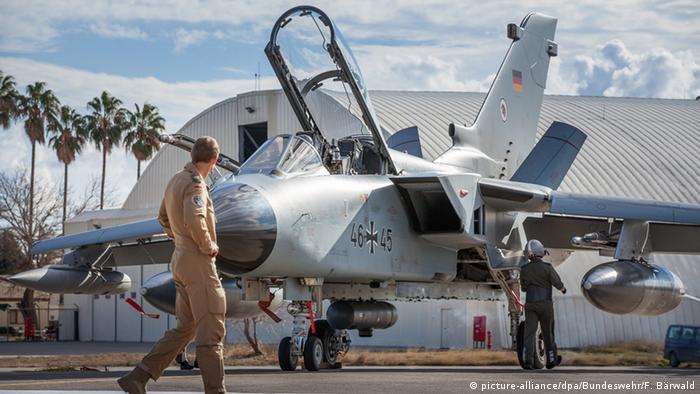 Turkey has denied permission for a senior German defense official and several members of parliament to visit Incirlik airbase in July, a spokesperson from the German defense ministry said Wednesday, as tensions mount between the NATO allies.

Germany has about 250 troops, six Tornado reconnaissance planes and a refueling aircraft at the airbase in southern Turkey as part of the international coalition fighting the so-called "Islamic State" in Syria.

Ralf Brauksiepe, the undersecretary for defense, planned to visit German troops in July with a parliamentary delegation, but has so far been blocked due to tensions between Berlin and Ankara over a Bundestag resolution earlier this month calling the 1915 massacre of Armenians a genocide.

"The Turkish authorities at the moment are not approving the travel plans," a German defense ministry spokesperson said, confirming a report in news magazine "Der Spiegel."

"There is no written statement on the reason," he said, adding the delegation still hoped to visit.

"Der Spiegel" reported that permission was denied in retaliation for the Armenian genocide vote. Turkey denies that the death of up to 1.5 million Armenians in the last days of the Ottoman Empire amounts to genocide.

Speaking to reporters on Thursday, Turkish Foreign Minister Mevlut Cavusoglu said only that the delegation's visit was "seen as inappropriate."

But he said a non-political delegation might be allowed.

"If a military, technical team from Germany wants to come, they can do so... their aircraft and soldiers are deployed there," Cavusoglu said.

Ties between Turkey and Germany were already strained before the genocide vote, in particular over President Recep Tayyip Erdogan's crackdown on the press and human rights abuses tied to ongoing military operations against Kurdish rebels.

The Armenian genocide resolution passed on June 3 by the German Bundestag was followed by a war of words between Ankara and Berlin.

In a speech, Erdogan said Turkish-German members of the Bundestag should have "blood tests" to see "what kind of Turks they are."

At the same time, Chancellor Angela Merkel has pinned Europe's hopes for a resolution to the migration crisis on an EU deal with Turkey. The deal would see Turkey take back migrants and crack down on boats crossing to Greece in exchange for aid, visa-free travel for Turkish citizens and the acceleration of Ankara's stalled EU membership talks.

"Our soldiers are there together with NATO. They are there also protecting Turkey," he told the German newspaper "Mitteldeutsche Zeitung" on Thursday.

Ankara's ban caused other German lawmakers to question the Bundeswehr's use of the Turkish base.

Florian Hahn, from the conservative Bavarian Christian Social Union, said Germany should think about whether the airbase in Amman, Jordan, was a possible alternative "in order not to limit our military flexibility."

Greens politician Tobias Lindner told the mass-circulation "Bild" newspaper that "the Bundeswehr should stop investing taxpayers' money in the expansion of the base" in light of Turkey's move.

Washington orders US military families out of southern Turkey

Among those requested to leave are the families of American soldiers at the Incirlik air base. The US State Department and Pentagon cited continued security fears for the notice. (29.03.2016)