Turkey asks Merkel to back its EU aspirations 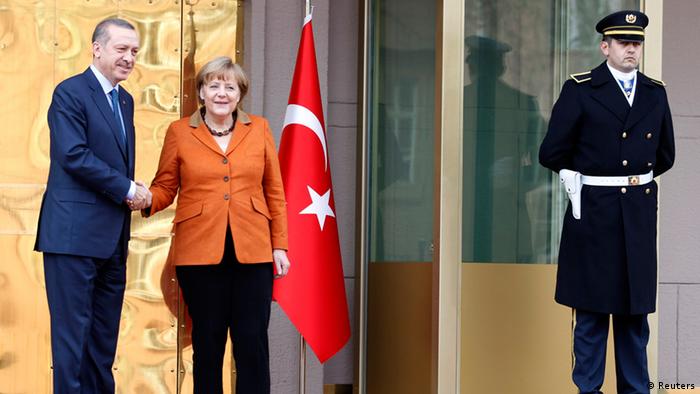 Merkel's trip was intended to increase bilateral ties with Turkey, but before her visit, the Chancellor made reference to the EU issue - telling her weekly podcast audience she supported the opening of a new chapter in the talks. However, she added that a "long path of negotiations lies ahead."

Speaking on Monday after talks with Erdogan, Merkel said she remained skeptical about Turkey becoming a full member of the EU. However she urged the bloc to move forward with talks, which have been going on for years.

In the past, the Chancellor had advocated a "privileged partnership" between Turkey and the EU, which originally applied for membership in 1987. Formal accession talks began in 2005, but have made little progress because of a dispute with the divided island of Cyprus, an EU member. There is also some opposition in Europe to admitting into the bloc a populous Muslim nation, as well as concerns over human rights issues, jailed journalists, and the internal conflict with Turkey's Kurdish minority.

"We want the process to advance, despite the fact that I have hesitations concerning Turkey's full European Union membership," said Merkel on Monday. "We are conducting negotiations whose outcome is open-ended, that is to say the results are not known."

Turkey has completed only one of 35 policy "chapters" or negotiating topics to gain EU accession, with Brussels citing Turkish failings to meet EU standards on human rights and freedoms. Turkey has complained of a lack of support.

Erdogan told the news conference that Turkey already considered itself "as good as a member anyway," given existing agreements it has with the EU and because five million Turks live EU member states - the majority of them in Germany.

He also hinted at moving forward with Cyprus, saying Turkey was ready for a constructive attitude following presidential elections there. Turkey's military took control of the northern segment of Cyprus in 1974, responding to a Greek-inspired coup seeking to unite the island with Greece. The island remains divided.

In the past, the prime minister has said Turkey might lose interest in becoming an EU member if its wish is not granted by 2023 - the centenary of the founding of the Turkish republic.

The talks between Merkel and Erdogan followed the release of a survey published in the German newspaper Bild am Sonntag. Conducted by the polling agency Emnid, the study found that six out of 10 Germans opposed Turkey joining the EU. Thirty percent were in favor, the rest were undecided.

But the Association of German Industry says German business supports Turkish membership. According to its head, Ulrich Grillo, speaking to the news agency dpa, Turkey is "a modern and booming economy in a geostrategically important location." The Association says Germany has been Turkey's biggest investor and its main trade partner since the 1980s.

Before meeting with Erdogan, Merkel was welcomed by Turkish President Abdullah Gül. On Sunday, she visited some 300 German troops deployed at Kahramanmaras with Patriot missile units, as part of a NATO mission to deter a spillover of warfare from Syria.