′Tunisian Girl′ blogs for freedom and democracy | World | Breaking news and perspectives from around the globe | DW | 12.12.2011

Lina Ben Mhenni's blog served as a key source of information on the crimes committed by the Ben Ali regime in Tunisia. After the dictator's fall, the 28-year-old kept tabs on Tunisia's progress toward democracy. People around the world flocked to Ben Mhenni's blog

Lina Ben Mhenni is always on the move - and always online. Whether it's at Tunis University, where she is an assistant professor, at international conferences, meeting with bloggers in cafes, or demonstrating in the street, she always carries a phone with a camera, a laptop and a mobile Internet connection. She is continually updating her status on Facebook and Twitter, posting pictures and commenting on articles and videos.

Ben Mhenni is "A Tunisian Girl," a blog that won the 2011 Deutsche Welle International Blog Award (the BOBs) in June. A panel of jury members chose her for her work documenting abuses by former Tunisian President Zine El Abidine Ben Ali's regime and promoting democracy in the country.

Revolution made by people 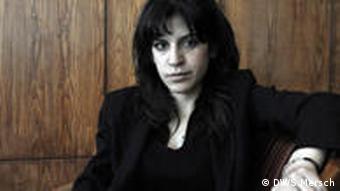 People, not online networks, were behind the Tunisian uprising, she says

During the protests that eventually ousted Ben Ali in January, the Internet was the only source of independent information. The protests were famously sparked when 26-year-old street vendor Mohamed Bouazizi set himself on fire in the town of Sidi Bouzid on December 17, 2010, after police said he didn't have the right permits to sell his goods.

The incident was captured on video, a piece of footage that evaded a media blackout by being disseminated on Facebook and other Internet platforms. When hundreds of people gathered to protest at the local authority's building, the government reacted with a brutal repression.

During the blackout, the Internet, Facebook, Twitter and Ben Mhenni's Arabic, French and English blog became one of the most important sources of information for Tunisians as well as people in the rest of the world.

But Ben Mhenni said she doesn't believe the uprising that resulted was an "online revolution." 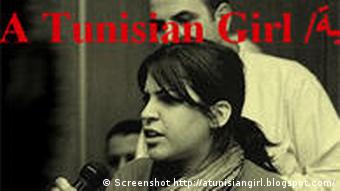 Ben Mhenni used her blog to keep the world informed

Ben Mhenni risked her own life by braving numerous roadblocks to see the bodies of the people murdered in faraway Tunisian towns by pro-Ben Ali forces. She published her pictures of the victims on her blog to make sure the rest of the world also saw what was happening.

"I will never be able to forget that moment," she said. "The picture of bullet wounds in a young man's corpse and the sorrow of his family and friends."

More than 200 people died during the Tunisian uprising, according to the United Nations. For the 28-year-old blogger, the regime's sheer violence was the biggest reason it needed to be toppled. 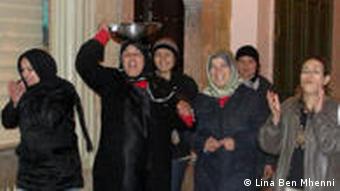 Ben Mhenni joined protesters on the streets in Tunis

"When I saw how people were being killed, it was clear to me that there was no going back," Ben Mhenni said. "Somehow I had to give these people and their families a voice so that their deaths would not be in vain."

In addition to documenting the crimes committed by the regime, she joined protesters on the street and gave interviews, via Skype, to international media organizations reporting on events in Tunisia. Like other activists, she risked arrest and torture several times.

Ben Mhenni's blogging career began in 2007 during studies in the US, after she discovered an article about blogging. Her first entries were simply personal journals, but her blog gradually became more critical of the Tunisian government, and she soon fell foul of the country's censors. All of her entries from 2007 to mid-2009 were blocked.

She countered by linking her content on as many Internet platforms as possible, in an attempt to evade state media controls. She says she was occasionally followed by the secret police during that time.

Her work seems to have paid off, now that Ben Ali's regime has been toppled, but she insists that the struggle for a democratic Tunisia and a just society continues. She has a scathing take on mainstream media outlets.

"The journalists still follow the same strategy as before," she says. "They are loyal to the strongest, the ones making decisions. The Tunisian press is neither independent or unbiased to this day."

She also complains that young people, who she credits as sparking and carrying the revolution, are not being allowed to participate in the new government. That is why her blog still documents injustices, and still publicizes new protests, when necessary.

Ben Mhenni was one of the favorites for this year's Nobel Peace Prize, but she says she was relieved when it was given to three other female human rights activists.

"I spent a horrific week in the limelight. I long for my normal life," she wrote on Facebook at the time. "Now the fight can continue."

Much has happened in Tunisia since the early days of the Jasmine Revolution. Ben Ali has been sentenced to 35 years in jail, and the first free elections have taken place. But Ben Mhenni is still blogging - about problems still lingering in Tunisian society, but also about mothers who lost their sons in the revolution, and about a past that still needs to be understood.

A professor at the University of Tunis, Lina Ben Mhenni was instrumental in informing people about repression under the Ben Ali regime. She writes about the mood of the protests that would change the face of Tunisia. (27.05.2011)

'A Tunisian Girl' talks about blogging under repressive regimes

Lina Ben Mhenni, the author of A Tunisian Girl, won the Best Blog award at the 2011 Deutsche Welle Blog Awards. She tells DW about why she doesn't use pseudonyms and the importance of remaining an independent voice. (12.04.2011)