'A Tunisian Girl' talks about blogging under repressive regimes

Lina Ben Mhenni, the author of A Tunisian Girl, won the Best Blog award at the 2011 Deutsche Welle Blog Awards. She tells DW about why she doesn't use pseudonyms and the importance of remaining an independent voice. 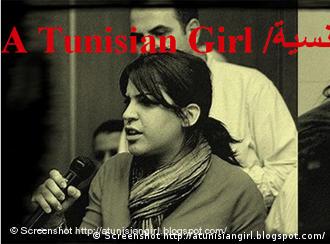 A Tunisian Girl won the BOBs' top prize for 2011

DW: Using your real name on your blog can put you in danger. Why have you decided to do it anyway?

Lina Ben Mhenni: When you write to defend human rights and freedom of expression, it's always more believable when you do it with your own name. When you're calling on people to get engaged for a particular reason, they have more trust in you when you show your own face.

It's easy to get the impression that blogging is lonely work. Have there been people who supported you before the fall of former president Ben Ali who are still with you today?

Yes, of course. You can't do it alone. It's mainly bloggers who have been supporting me. It's true that I tend to work alone, but there have been many times when I've collaborated with other bloggers to support the people suffering from injustice and censorship.

There has been a lot of talk about the role of the Internet during events in Tunisia and Egypt and even in Libya and the Gulf states. What is your view on how the Internet has and continues to influence ongoing uprisings?

The traditional media did not report on events in Tunisia at all. By necessity, it became a role the Internet had to play. The Internet made it possible to report on these events and to bring people together.

You have personally received a fair amount of attention when it comes to events in Tunisia. Have you been approached to take up a political position?

No, not really. We tried it once when Ben Ali was still in power. But I was adamant about remaining independent. I don't have an interest in getting involved with a political party.

A new pro-government Iranian blogging competition recently came to a close. Many Iran watchers see this new promotion of blogging as an example of a double standard set by the Iranian government. (01.04.2011)

Picture Gallery: Winners of the 2011 BOBs