US President Donald Trump has said the coronavirus outbreak will "get worse before it gets better." In a change of tune, Trump also encouraged Americans to wear face masks. 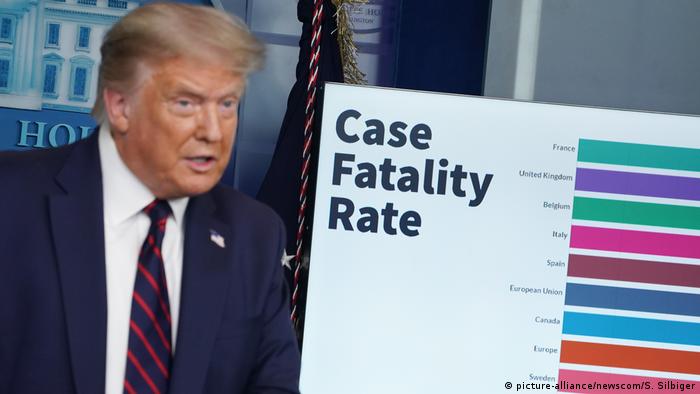 US President Donald Trump on Tuesday warned that the coronavirus crisis in the US is likely to "get worse before it gets better" as lawmakers met in Washington DC to discuss a historic coronavirus rescue package.

"Some areas of our country are doing very well," Trump said, speaking at his first formal White House virus briefing since the end of April. "Others are doing less well."

"It will probably, unfortunately, get worse before it gets better — something I don't like saying about things, but that's the way it is," he said.

There has been "a concerning rise in cases in many parts of our South," the president said.

The comments came at the end of a briefing that lasted less than half an hour, in which no health officials were present.

Trump 'getting used' to mask

In an about-face, Trump urged Americans to wear face masks to help slow the spread of the deadly infection. Over 141,000 people in the US have died from the coronavirus.

"We are asking everybody that when you are not able to socially distance, wear a mask," Trump said. "Whether you like the mask or not, they have an impact. They will have an effect and we need everything we can get."

Trump said he is "getting used to" wearing a mask and that he has "no problem" wearing one.

Over the past months, Trump has resisted wearing a face mask in public and once suggested that doing so was a political statement against him.

The goal is "not merely to manage the pandemic but to end it," Trump said.

"The vaccines are coming and they're coming a lot sooner than anyone thought possible," he said.

Trump also repeated his assertion that the virus "will disappear."

Read more: On accepting US election result, Donald Trump says 'I have to see'

The briefing came as US lawmakers and White House officials negotiated on coronavirus rescue plan that could potentially value more than $ 1 trillion (€ 867 million).

With the US presidential election just over three months away, polls show Americans are increasingly unhappy with the president's handling of the pandemic. Trump is currently trailing in popularity behind his Democratic rival, Joe Biden.