Democrats have clinched historic impeachment charges against US President Donald Trump. But they have a few reasons to delay the final trial in the Senate. 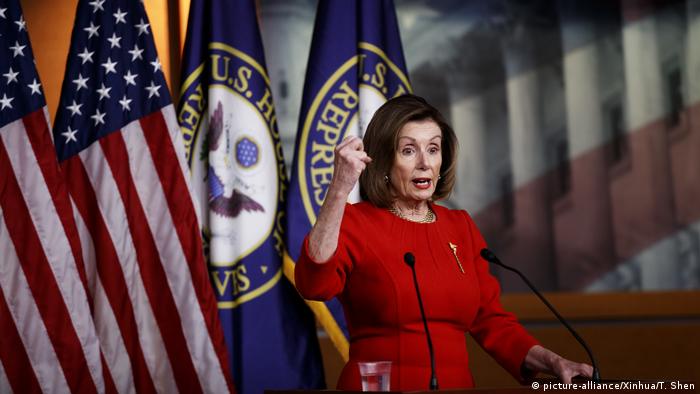 House Speaker Nancy Pelosi suggested Thursday that Democrats could delay impeachment proceedings against US President Donald Trump in order to assure a fair trial in the Senate.

Immediately after the historic Wednesday vote to impeach the president, Democrats asked that four key witnesses be allowed to testify in the Senate trial. Trump had blocked four former and current White House aids with direct knowledge of the president's affairs in Ukraine from testifying on the matter for the trial in the House.

Democrats also want more documents and further testimony to be included in the proceedings.

"The next thing will be when we see the process that is set forth in the Senate," Pelosi said in a press conference on Thursday, adding that only then would Democrats consider appointing impeachment managers, the House prosecutors who will argue the legal case against the president.

The two impeachment articles must be formally transmitted to the Senate for the trial to begin. The House impeached Trump for abuse of office and obstruction of Congress.

"We'd like to see a fair process, but we'll see what they have and will be ready for whatever it is," Pelosi said.

Both sides keep their cool

"I'm not sure what leverage there is in refraining from sending us something we do not want," McConnell responded on the Senate floor. House Republicans had voted unanimously against impeachment charges for the president.

McConnell and Senate minority leader Chuck Schumer met briefly Thursday in a first attempt at hammering out details of a trial that could begin as early as the second week of January.

A two-thirds majority vote is necessary from the Republican-held Senate to convict the president of the impeachment charges and remove him from office. Republicans have said they would vote to exonerate the president.

While a swift trial without new witnesses would work in Republicans' favor, it is in the interest of Democrats to stall, with the hope that Republican senators will eventually cave to public pressure and break ranks.

As lawmakers adjourned Thursday evening for the Christmas holiday, McConnell signaled that a timeline for the trial will remain undecided into the new year.

"We remain at an impasse on these logistics," he said.

Meanwhile, Trump lashed out at the delay in several tweet.

"I want an immediate trial!" he wrote.

Trump is the third president in US history to be impeached. He is charged with abusing his power to pressure Ukraine's president into investigating Democratic political rival Joe Biden.

The bill aims to spend $369 billion on energy and climate initiatives and $64 billion into state-funded healthcare. It also looks to raise minimum taxes for big companies.