US Democrats announce two articles of impeachment against Donald Trump

Two articles of impeachment against Trump have been unveiled. Democrats have accused him of abuse of power and obstruction in pressuring Ukraine to investigate his 2020 election rivals. 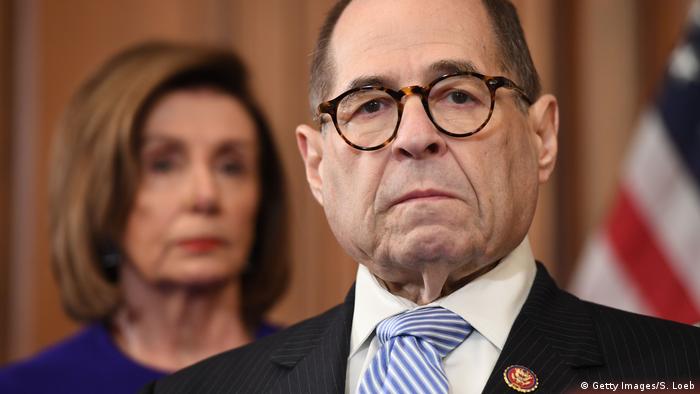 US Democrats unveiled two charges, known as articles of impeachment, against US President Donald Trump on Tuesday.

The articles of impeachment are for abuse of power and obstruction of Congress.

"Our president holds the ultimate public trust. When he betrays that trust and puts himself before country, he endangers the constitution, he endangers our democracy and he endangers our national security," said Jerry Nadler, chairman of the House Judiciary Committee.

The charges will be taken to a vote in the House of Representatives next week, which, if successful, will mean Trump officially faces impeachment and a trial in the Senate. Only two presidents have successfully been impeached before: Bill Clinton in 1998 and Andrew Johnson in 1868, both of whom kept their positions, neither of whom were deposed. Richard Nixon resigned before being impeached.

Trump swiftly responded to the developments, calling it a witch hunt.

A statement from the White House said Trump would address the two "baseless" impeachment charges during the Senate trial, adding that he "expects to be fully exonerated, because he did nothing wrong."

Trump is unlikely to be convicted in the Senate, which is controlled by his own Republican party.

At a hearing on Monday, four months after a whistleblower sparked an investigation into Trump and alleged political pressure on Ukraine, Democrats said there was abundant evidence he had committed bribery, abused his power and obstructed the investigation.

"President Trump's persistent and continuing effort to coerce a foreign country to help him cheat to win an election is a clear and present danger to our free and fair elections and to our national security," said Daniel Goldman, counsel for the Democrats.

Republicans dismissed the move as another attempt to politically undermine the president ahead of next year's elections.

Top Republican Doug Collins countered that the effort was simply "a good PR move" for Democrats ahead of next year's presidential elections. "It's all political," Collins said. "Where's the impeachable offense? Why are we here?"

The nine-hour, combative hearing on Monday allowed Democrats to consolidate their arguments and evidence against Trump, and came as the Department of Justice released a report that found no bias in the investigations against Trump's aides. The report effectively undermined Trump's argument that the Department of Justice investigations were politically motivated.

The impeachment proceedings hinge on allegations that Trump abused his power as president by pressuring Ukraine to announce an investigation into his political rival Joe Biden.

The US president said during his controversial phone call with his Ukrainian counterpart that he has "many Ukrainian friends." DW takes a look at who Donald Trump could have meant. (02.10.2019)

US Speaker of the House Nancy Pelosi announced that lawmakers will move forward to draft articles of impeachment against President Donald Trump. The president's actions seriously violated the Constitution, she said. (05.12.2019)

US President Trump refuses to take part in impeachment hearing

The White House has told the Judiciary Committee that "we do not intend to participate in your Wednesday hearing." However, the Trump administration has not entirely dismissed the prospect of future involvement. (02.12.2019)