House lawmakers have voted to impeach US President Donald Trump for abuse of power and obstruction of Congress. A trial in the Republican-held Senate will decide if he will be removed from office. 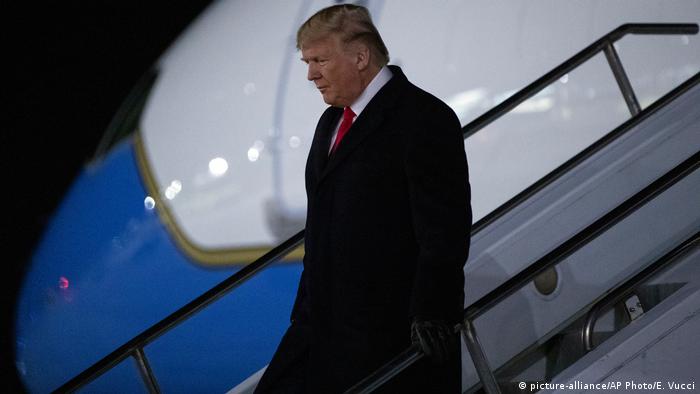 Lawmakers in the US House of Representatives voted on Wednesday to impeach US President Donald Trump. The result was widely expected and the case is now set to advance to a trial in the Senate.

In a 10-hour debate leading up to the vote, lawmakers argued for and against two articles of impeachment. The first charged the president with abuse of power in trying to get Ukraine to investigate Democratic Party presidential candidate and former Vice President Joe Biden and the second with obstruction of Congress related to the president's handling of recent Congressional investigations.

Click here to relive the events of the debate as they happened.

In the first of two votes held Wednesday evening, 230 Democratic lawmakers delivered the simple majority necessary to bring impeachment charges against the president for Article 1, abuse of power.

Trump is the third president in US history to be impeached. Impeachment is the process whereby Congress brings charges against civil officials of the US government for suspected high crimes and misdemeanors.

The case advances to the Senate

Democrats accuse Trump of withholding military aid and a White House visit to pressure Ukrainian President Volodymyr Zelenskiy to investigate his political rival Joe Biden and his son Hunter for his own political gain. He is also accused of obstructing Congress by refusing to cooperate with the impeachment investigation.

Following the decisive vote, the White House expressed optimism about the next phase of the proceedings.

Trump "is prepared for the next steps and confident that he will be fully exonerated" in the Senate trial, said White House spokeswoman Stephanie Grisham in a statement.

The president himself was not present in Washington for the impeachment deliberations. Instead, he flew Michigan for a rally, taking the stage just minutes before lawmakers in the capital confirmed the impeachment charges.

"While we're creating jobs and fighting for Michigan, the radical Left in Congress is consumed with envy and hatred and rage, you see what's going on," the president said to the crowds, adding that the Democratic party was "trying to nullify the ballots of tens of millions of patriotic Americans."

In a news conference following the impeachment vote, House Speaker Nancy Pelosi caused confusion by refusing to say when or if she would send the articles of impeachment on to stand trial in the Senate.

"We'll see what happens," she said, adding that Democratic lawmakers could not appoint impeachment managers until they know what the Senate has planned for the trial. Impeachment managers are the House prosecutors who argue the case against the president.

"We are not having this discussion. We have done what we set out to do," she said.

New York Congressman Lee Zeldin was giving a speech about bail reform when an attacker entered the stage. Zeldin is the Republican candidate for New York state governor.

A visit to Taiwan by the US House of Representatives' Nancy Pelosi would put pressure on China to respond militarily. But Beijing will be careful to not trigger direct military confrontation with the US, say experts.

US lawmakers accused Donald Trump of inciting a mob to attack the US Capitol in a last-ditch effort to remain in power. The January 6 committee said Trump aides knew he would call for a march on the Capitol.