Trump era: Welcome to alternative reality | World| Breaking news and perspectives from around the globe | DW | 24.01.2017

After the first days of Donald Trump as US President, DW's reporter Michael Knigge is bewildered and disillusioned. But the predominant feeling is one of bearing witness to an historical upheaval. 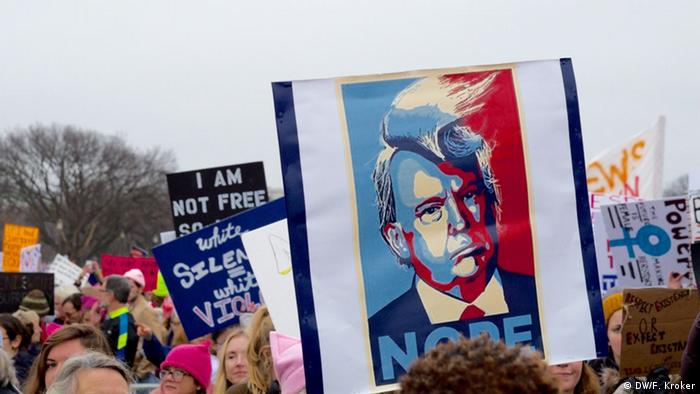 Those who observed Trump in action during the election campaign and, above all, as President-elect, had little hope that his inauguration would change anything. The way Trump performed on his first weekend in office has been unsettling, and not only for his critics. It began with his nationalistic and characteristically aggressive inauguration speech, the likes of which had never before been seen or heard in Washington.

If this wasn't enough of a break with convention, only hours after what is usually celebrated as a weekend of national reconciliation and joy, Trump was twice at it again. He engaged in a bizarre fight with the media about audience numbers at his inauguration. Trump's insistence that it had been the biggest of all time culminated with his spokesperson declaring untruths to be truths. A top presidential adviser later called these "alternative facts." But that's not all. On the same day as his inauguration, he untruthfully claimed that he had not argued with the intelligence services and that it had all been fabricated by the media. For the rest of the speech he mostly spoke about himself and very little about the agencies.

A break with tradition and convention 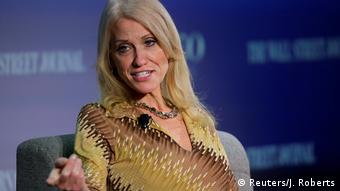 Many journalists have needed little confirmation of change: the break with tradition that was implemented in the American capital over the weekend has been so strange, so radical and so fast. Not far from the White House, a grey haired woman in her mid-70s, the cashier at a drug store, suddenly started pouring her heart out. Without being asked, while scanning items, her words started flowing out. "I am still trying to understand how this has happened. And we have this for the next four years." She sighed and kept pushing items along. "And that's if we're lucky."

This is a pretty good summary of the state of mind of many people here - and elsewhere. But it is not sufficient to describe what has happened since Friday. And after only a few days of Donald Trump it is certainly too early to draw general conclusions. It is hard to put into words and explain the attempt to break with the recent past, as in Obama's term of office, as well as the more distant past of Obama's predecessors.

But it is not just the tone, the style, the political outlook and the understanding of the office of President that is so drastically different from anything we have seen before. It is also about Donald Trump himself and a time in history that has enabled his rise from reality TV star to president. This is why it is perhaps easier to say how things have felt since Friday 12pm Washington time than to adequately describe them in words. And based on the statement by Trump's top advisor, the first days of his presidency feel like being in an alternative reality. 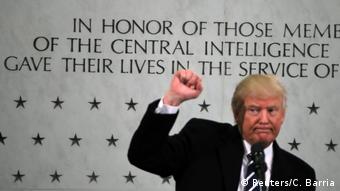 Trump visiting the CIA on January 21

Now all this is not only imaginable, but has become reality. Many of the established unspoken rules in American politics, that have continued regardless of whether a Democrat or Republican was in power, seem to have been suspended since Friday afternoon. This feeling of a break with the past has been perhaps intensified due to the extreme contrast between the out-going and in-coming presidents. On the one hand, there is the distant but "cool" first black president and on the other hand, there is the impulsive, white and oldest president.

Time will tell whether this alternative reality was just a short interlude or whether, as many people here fear, it will become the "new normal." The reactions from the first few days of Trump's presidency, for example the Women's Marches here in Washington and around the world, are an indication that the struggle for the definition of reality has perhaps only just begun.