The US president has hit out at second lockdowns announced this week by several European countries. His top infectious diseases expert has broken ranks, saying Donald Trump's rival is taking the pandemic "seriously." 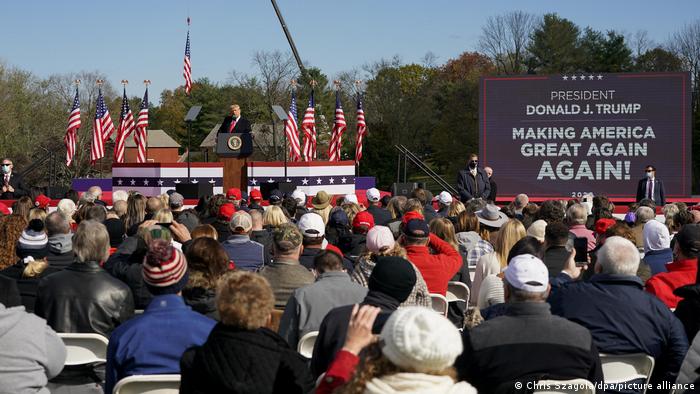 "What the hell are they [Europe] doing?" Trump told a campaign rally in Michigan. "I think I'll go over and explain it to them."

He warned voters that his Democratic rival, Joe Biden, would mimic those tough measures and pledged to never shut down parts of the US again.

Read more: Manning the polls: How the coronavirus has changed the face of US democracy

"I am delivering the great American comeback and we are not having any lockdowns. That I can tell you, there's no lockdowns," he said to loud cheers from the crowd.

The country follows Germany, Austria and France who announced new curbs on movement this week amid a huge surge in coronavirus infections.

Both candidates for Tuesday's US presidential election made a last-minute scramble to attract voters in battleground states. Biden — who polls say is maintaining an overall lead over Trump — hit back over the president's record on the pandemic.

"More than 230,000 Americans have died from COVID-19 — and Donald Trump has given up on trying to get the virus under control," he said on Twitter.

"He may have quit on you, but I promise I never will."

As well as Michigan, Trump was visiting Iowa, North Carolina; Georgia and Florida for further rallies Sunday. Biden was traveling to Pennsylvania to address his supporters and will be joined on stage in Philadelphia by Lady Gaga and John Legend.

Meanwhile, the US government's top infectious diseases expert said the country should prepare for "a whole lot of hurt'' in the weeks ahead due to surging coronavirus cases.

Dr. Anthony Fauci told the Washington Post that the US "could not possibly be positioned more poorly" to stem rising cases as more people gather indoors during the colder fall and winter months.

Fauci, who is on the White House coronavirus task force, added that he believes Democratic presidential candidate Joe Biden "is taking it [the pandemic] seriously from a public health perspective,'' while Trump is "looking at it from a different perspective."

A record 90 million Americans have voted early in the US presidental election. With just three days of campaigning left, President Donald Trump and Joe Biden are touring crucial swing states in a final push.