Donald Trump is accused of advocating violence to prevent Hillary Clinton from taking away Americans' guns if elected. The former Secretary of State has increased her lead over the billionaire in a new poll. 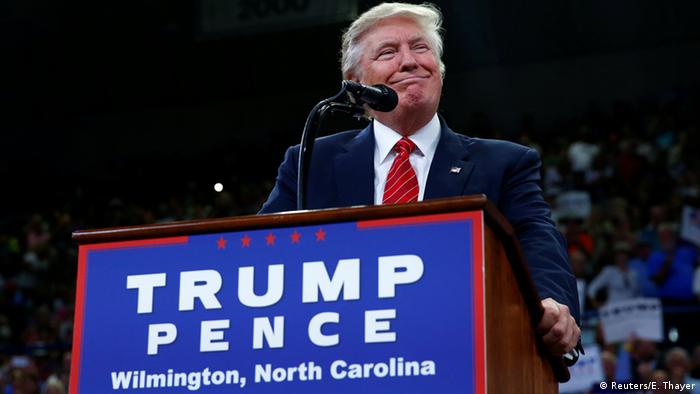 On Tuesday, Donald Trump said gun enthusiasts could prevent Hillary Clinton from enacting a broad disarmament of Americans through the judiciary if elected. The Republican presidential candidate has repeatedly accused his Democratic opponent of seeking to take away Americans' guns. The former secretary of state says all she wants is tougher controls in a country where 372 mass shootings left 475 people dead and 1,870 wounded in 2015.

"Hillary wants to essentially abolish the Second Amendment," Trump said in North Carolina, referring to the constitutional dictate that "the right of the people to keep and bear arms shall not be infringed." He added: "If she gets to pick her judges, nothing you can do folks - although, the Second Amendment people, maybe there is, I don't know."

Clinton's campaign manager accused the billionaire of trying to incite violence. "This is simple," Robby Mook wrote in a statement. "What Trump is saying is dangerous. A person seeking to be the president of the United States should not suggest violence in any way."

Trump's communications director said the former reality show host hadn't meant it that way. "Second Amendment people have amazing spirit and are tremendously unified, which gives them great political power," Jason Miller said. "And this year they will be voting in record numbers - and it won't be for Hillary Clinton: It will be for Donald Trump."

The Republican also endorsed North Carolina's voter ID laws after a federal court ruled the state's regulations a barrier to participation in democracy, especially for black voters. "Why are we not having voter ID?" Trump asked his audience. He then told the crowd that he would "never ask you to vote 15 times" - but implied that Clinton would.

Clinton's lead in the wild 2016 presidential campaign has increased by four points, according to an August 4-8 Reuters/Ipsos of 1,152 likely voters. Forty-two percent of likely voters favor Clinton and 35 percent prefer Trump, according to the poll, which had a credibility interval of plus or minus three percentage points. The others would either pick another candidate, would not vote, didn't know or refused to answer.

Clinton leads by 13 percentage points among registered voters - up from about five percentage points on Thursday, according to the poll. The results reflect a decline in support for Trump rather than a boost for Clinton: In last Thursday's poll, 42 percent of likely voters favored the former senator and about 39 percent chose the real estate magnate.

The Libertarian candidate Gary Johnson came in third in the poll released Tuesday, with nearly 8 percent, up from 6 on Thursday. The Green Party's Jill Stein has about 2 percent.

Peru: Voters head to the polls amid COVID-19 surge 30m ago