Fifty former national security officials have said Republican candidate Donald Trump would be 'the most reckless president in American history.' Their harsh statement indicates the depth of feeling within the party. 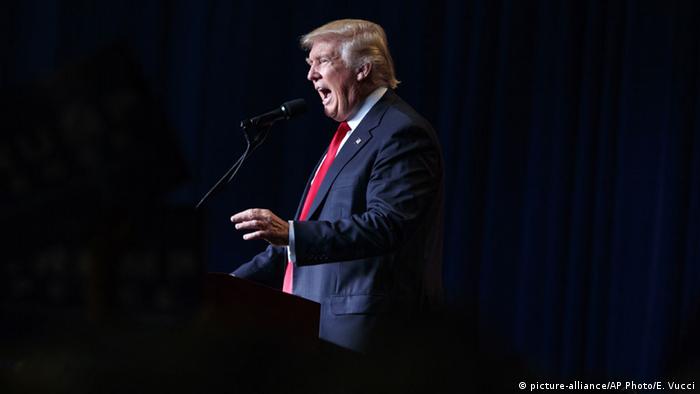 In an increasingly bitter war of words between leading members of the Republican party and their presidential candidate Donald Trump, the security officials, including a former CIA director, on Monday said the party nominee was unqualified to lead the country.

"Trump lacks the character, values, and experience to be president," the statement read. "He weakens US moral authority as the leader of the free world. He appears to lack basic knowledge about and belief in the US Constitution, US laws and US institutions, including religious tolerance, freedom of the press, and an independent judiciary."

"None of us will vote for Donald Trump," said the statement, whose signatories include former Central Intelligence Agency Director Michael Hayden, who also headed the National Security Agency, former Homeland Security Secretary Michael Chertoff, former Director of National Intelligence John Negroponte and two former US trade representatives, Carla Hills and Robert Zoelick. The statement was organized by Philip Zelikow, who had previously been an adviser to former Secretary of State Condoleezza Rice.

"From a foreign policy perspective, Donald Trump is not qualified to be president and commander in chief," according to the statement.

"Indeed, we are convinced that he would be a dangerous president and would put at risk our country's national security and well-being," the statement continued.

However, the statement noted that some signatories also have doubts about Democratic presidential nominee Hillary Clinton. The statement said many Americans were frustrated with the federal government's failure to solve domestic and international problems.

The Trump response to the statement was equally harsh. He described the signatories to the statement as members of the "failed Washington elite" who deserved "blame for making the world such a dangerous place." He said they were the reason why the world was "a mess."

"These insiders, along with Hillary Clinton, are the owners of the disastrous decisions to invade Iraq, allow Americans to die in Benghazi, and they are the ones who allowed the rise of ISIS," using an acronym for the "Islamic State" militant group.

Trump's speech on the economy at the Detroit Economic Club on Monday was interrupted more than a dozen times on Monday by protesters. The prestigious Club is more than 80 years old and has hosted presidential candidates since Richard Nixon stood for election in 1968.

For her part, Hillary Clinton responded to Trump's speech on the economy by saying his policies would benefit rich corporations and the wealthiest Americans, at the expense of the working people. She is expected to make a speech on economic issues on Thursday.

Republicans lash out at Trump

War of words between Republican leaders and Trump